Every material in nature has certain properties. These properties define the behavior of the materials. Material Science is a branch of electronics that deals with the study of flow of electrons in various materials or spaces, when they are subjected to various conditions.

Electronically, the materials are broadly classified as Insulators, Semiconductors, and Conductors.

A Semiconductor is a substance whose resistivity lies between the conductors and insulators. The property of resistivity is not the only one that decides a material as a semiconductor, but it has few properties as follows.

The Semiconductor devices are extensively used in the field of electronics. The transistor has replaced the bulky vacuum tubes, from which the size and cost of the devices got decreased and this revolution has kept on increasing its pace leading to the new inventions like integrated electronics. Semiconductors can be classified as shown below.

Let us try to understand what happens when the P and N materials are joined together.

If a P-type and an N-type material are brought close to each other, both of them join to form a junction, as shown in the figure below. 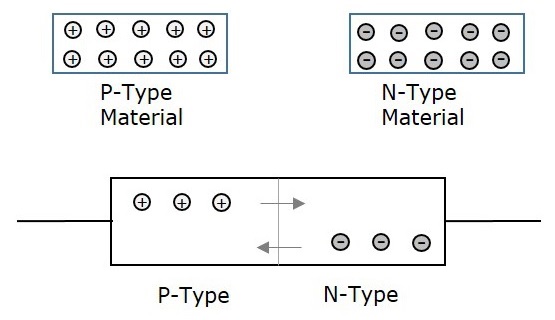 As both of them travel towards the junction, holes and electrons recombine with each other to neutralize and forms ions. Now, in this junction, there exists a region where the positive and negative ions are formed, called as PN junction or junction barrier as shown in the figure. 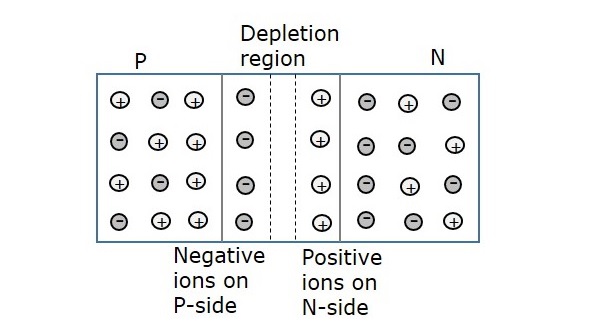 As this region acts as a barrier between P and N type materials, this is also called as Barrier junction. This has another name called as Depletion region meaning it depletes both the regions. There occurs a potential difference VD due to the formation of ions, across the junction called as Potential Barrier as it prevents further movement of holes and electrons through the junction. This formation is called as a Diode.

Biasing of a Diode

When a diode is connected in a circuit, with its anode to the positive terminal and cathode to the negative terminal of the supply, then such a connection is said to be forward biased condition.

This kind of connection makes the circuit more and more forward biased and helps in more conduction. A diode conducts well in forward biased condition.

When a diode is connected in a circuit, with its anode to the negative terminal and cathode to the positive terminal of the supply, then such a connection is said to be Reverse biased condition.

This kind of connection makes the circuit more and more reverse biased and helps in minimizing and preventing the conduction. A diode cannot conduct in reverse biased condition.

With the above information, we now have a good idea of what a PN junction is. With this knowledge, let us move on and learn about transistors in the next chapter.