A Transistor is a three terminal semiconductor device that regulates current or voltage flow and acts as a switch or gate for signals.

Uses of a transistor

Constructional Details of a Transistor

The Transistor is a three terminal solid state device which is formed by connecting two diodes back to back. Hence it has got two PN junctions. Three terminals are drawn out of the three semiconductor materials present in it. This type of connection offers two types of transistors. They are PNP and NPN which means an N-type material between two Ptypes and the other is a P-type material between two N-types respectively.

The following illustration shows the basic construction of transistors

The three terminals drawn from the transistor indicate Emitter, Base and Collector terminals. They have their functionality as discussed below.

The symbols of PNP and NPN transistors are as shown below. 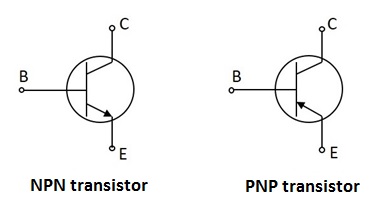 The arrow-head in the above figures indicated the emitter of a transistor. As the collector of a transistor has to dissipate much greater power, it is made large. Due to the specific functions of emitter and collector, they are not interchangeable. Hence the terminals are always to be kept in mind while using a transistor. 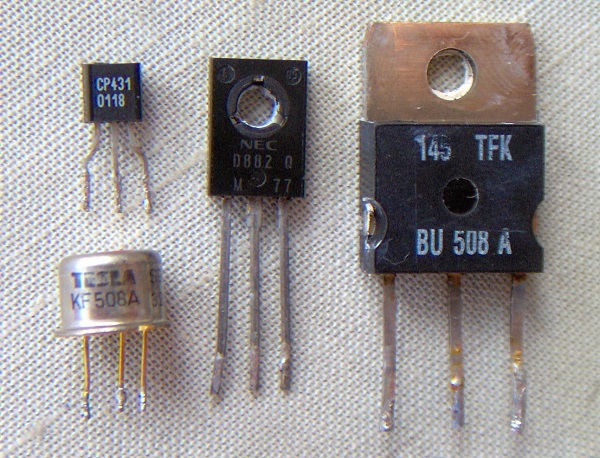 As we know that a transistor is a combination of two diodes, we have two junctions here. As one junction is between the emitter and base, that is called as Emitter-Base junction and likewise, the other is Collector-Base junction. 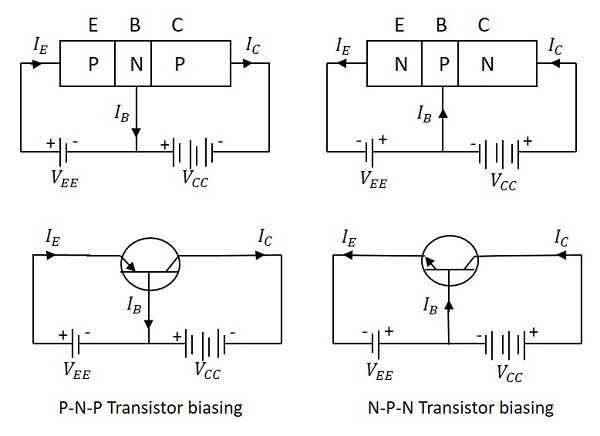 By having a look at the above figure, it is understood that

The direction of current indicated in the circuits above, also called as the Conventional Current, is the movement of hole current which is opposite to the electron current. 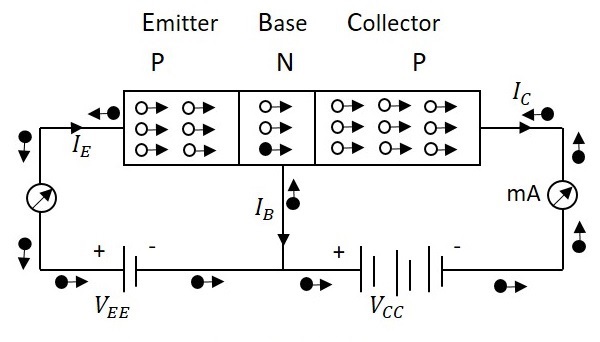 The voltage VEE provides a positive potential at the emitter which repels the holes in the P-type material and these holes cross the emitter-base junction, to reach the base region. There a very low percent of holes re-combine with free electrons of N-region. This provides very low current which constitutes the base current IB. The remaining holes cross the collector-base junction, to constitute collector current IC, which is the hole current.

As a hole reaches the collector terminal, an electron from the battery negative terminal fills the space in the collector. This flow slowly increases and the electron minority current flows through the emitter, where each electron entering the positive terminal of VEE, is replaced by a hole by moving towards the emitter junction. This constitutes emitter current IE. 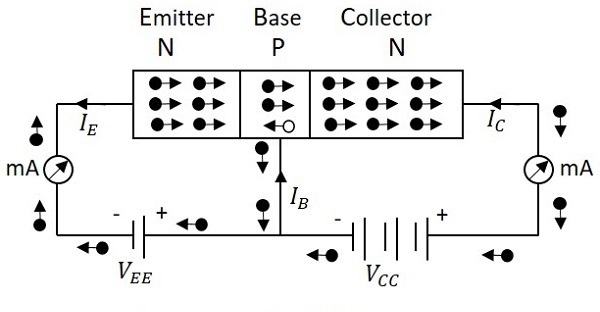 The voltage VEE provides a negative potential at the emitter which repels the electrons in the N-type material and these electrons cross the emitter-base junction, to reach the base region. There, a very low percent of electrons re-combine with free holes of P-region. This provides very low current which constitutes the base current IB. The remaining holes cross the collector-base junction, to constitute the collector current IC.

There are many advantages of using a transistor, such as −

There are few disadvantages such as they cannot be used for high power applications due to lower power dissipation. They have lower input impedance and they are temperature dependent.