In this circuit, we use two complementary transistors in the output stage with one transistor being an NPN or N-channel type while the other transistor is a PNP or P-channel (the complement) type connected in order to operate them like PUSH a transistor to ON and PULL another transistor to OFF at the same time. This push-pull configuration can be made in class A, class B, class C or class AB amplifiers.

The construction of the class A power amplifier circuit in push-pull configuration is shown as in the figure below. This arrangement mainly reduces the harmonic distortion introduced by the non-linearity of the transfer characteristics of a single transistor amplifier. 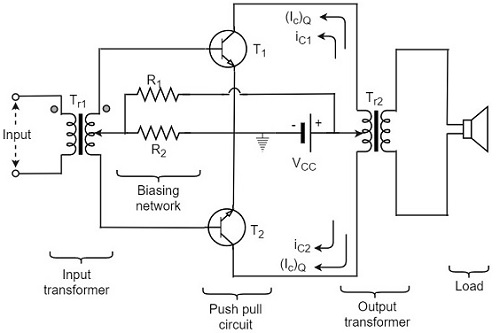 Hence, the voltage across the load will be induced voltage whose magnitude will be proportional to the difference of collector currents i.e.

Similarly, for the negative input signal, the collector current ic2 will be more than ic1. In this case, the voltage developed across the load will again be due to the difference

The polarity of voltage induced across load will be reversed.

To have a better understanding, let us consider the below figure. 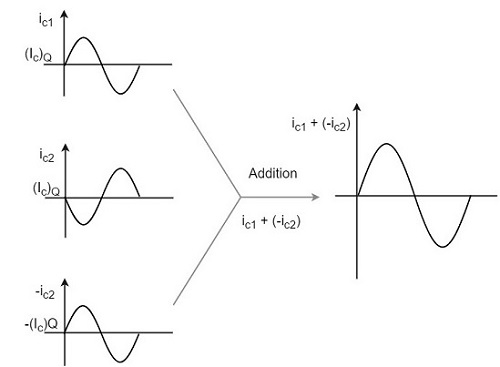 The overall operation results in an a.c. voltage induced in the secondary of output transformer and hence a.c. power is delivered to that load.

It is understood that, during any given half cycle of input signal, one transistor is being driven (or pushed) deep into conduction while the other being non-conducting (pulled out). Hence the name Push-pull amplifier. The harmonic distortion in Push-pull amplifier is minimized such that all the even harmonics are eliminated.

The advantages of class A Push-pull amplifier are as follows

The disadvantages of class A Push-pull amplifier are as follows