We hope that you have gained sufficient knowledge on operating point, its stability and the compensation techniques in the previous chapter. Let us now try to understand the fundamental concepts of a basic amplifier circuit.

An electronic signal contains some information which cannot be utilized if doesn’t have proper strength. The process of increasing the signal strength is called as Amplification. Almost all electronic equipment must include some means for amplifying the signals. We find the use of amplifiers in medical devices, scientific equipment, automation, military tools, communication devices, and even in household equipment.

When only one transistor with associated circuitry is used for amplifying a weak signal, the circuit is known as single-stage amplifier. 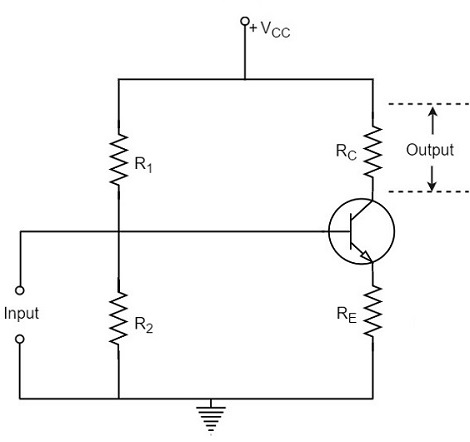 Hence a small input at the base gets amplified as the signal of larger magnitude and strength at the collector output. Hence this transistor acts as an amplifier.

Practical Circuit of a Transistor Amplifier

The circuit of a practical transistor amplifier is as shown below, which represents a voltage divider biasing circuit. 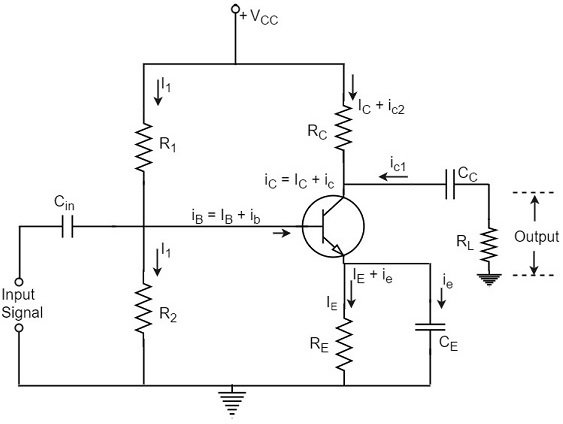 The various prominent circuit elements and their functions are as described below.

The resistors R1, R2 and RE form the biasing and stabilization circuit, which helps in establishing a proper operating point.

Due to the presence of coupling capacitor CC, the output across the resistor RL is free from the collector’s DC voltage. If this is not present, the bias conditions of the next stage will be drastically changed due to the shunting effect of RC, as it would come in parallel to R2 of the next stage.

This capacitor is employed in parallel to the emitter resistor RE. The amplified AC signal is by passed through this. If this is not present, that signal will pass through RE which produces a voltage drop across RE that will feedback the input signal reducing the output voltage.

The resistance RL connected at the output is known as Load resistor. When a number of stages are used, then RL represents the input resistance of the next stage.

Let us go through various circuit currents in the complete amplifier circuit. These are already mentioned in the above figure.

It should be remembered that

As base current is usually small, it is to be noted that

These are the important considerations for the practical circuit of transistor amplifier. Now let us know about the classification of Amplifiers.