SAP PI architecture consists of multiple components which are used at design time, configuration time and runtime. In SAP PI, the sender system is known as the source and the receiver is called the target system and the architecture is known as Hub and Spoke structure. The Spoke is used to connect with external systems and Hub is used to exchange messages.

A SAP PI system is divided into the following components − 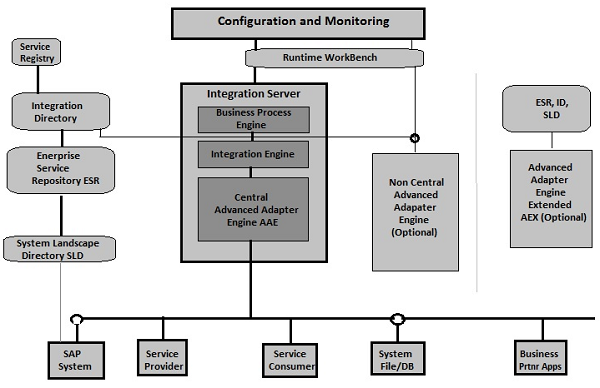 This is a tool used to provide central monitoring of PI components and messages.

This is one of the key components of the SAP PI system and is used for processing of messages.

It consists of the following three engines −

This engine is used for message correlation and deals with the processing of messages in ccBPM.

A mapping runtime is based on Java Stack as mentioned under the SAP PI platform topic.

A message can be of the following two types −

In SAP PI, a message is represented by an interface. An Interface contains the structure of the message in XML format and the direction.

In SAP PI architecture, you can consider Adapter Engine as Spoke and Integration Engine as HUB to connect to external systems.