Thousands of camels from different regions arrived in the tiny desert town of Pushkar, located in Rajasthan, the western state of India, for the annual Pushkar Fair. The Pushkar is fascinating and peculiar sight, and a fascinating opportunity to witness an old traditional-style Indian festival.

The creative intention behind the Pushkar Camel Fair is to attract local camel and cattle traders to exercise business during the holy Kartik Purnima festival, usually held in Pushkar around the full moon in the Hindu lunar month of Kartika.

The inauguration ceremony which was held on November 27, 2018, witnessed the biggest ever drone flying show in India. 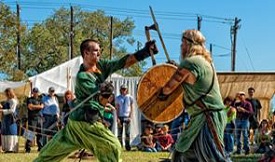 Celebrated in Austin, the capital of Texas state of the United States, Austin Celtic Festival is a 2-day event held in the first week of November 2018. This event displays products like the highest quality regional and international Celtic artists with an extraordinary lineup of talent, celtic dance, exciting Heavy Games competition, the Celtic ancestry of some of today's dog breeds with our Celtic Dog Parades.