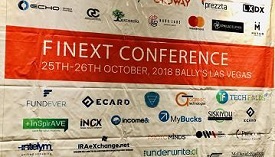 Sanjoy Gaddipati, the Founder, CEO, and Managing Director of International CryptoX Pte. Ltd, INCX, has received Excellence in FINEXT Award 2018 at the Finextcon conference held at Las Vegas in USA.

The Finextcon 2018 awards have recognized the innovative, creative and successful projects in financial technology from all around the world. This awards celebrated the success stories of the companies in the financial markets.

INCX is a world class ultra-scalable crypto currency trading platform, which is claimed to be the world's fastest crypto exchange with simple, compliant and highly secure features. It offers other unique features and would be Asia's first FIAT Crypto bridge. INCX has offices in many countries including India, USA, Singapore, and recently opened its office at Malta.

International Crypto Exchange (INCX) is all set to open its crypto currency exchange to the global community. The INCX platform is uniquely dignified with its cutting-edge technology platform features such as − 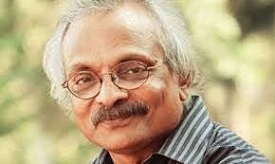 The eminent Malayalam novelist and short story writer Mr. M Mukundan has been nominated for the Kerala government's highest literary award 'Ezhuthachan Puraskaram.' He has been chosen for his overall contributions to the Malayalam literature.

Originally from Mahe, a former French colony and an enclave of Union Territory of Puducherry in Kerala, Mukundan is popular as "Mayyazhiyude Kathakaran" (storyteller of Mayyazhi - Mahe). 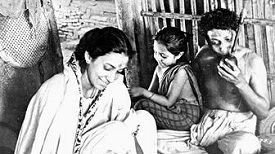 Pather Panchali, Satyajit Ray’s epic masterpiece, has been included in BBC’s list of 100 best foreign language films and surprisingly, it is the only Bollywood film (from India) to be featured in it.

Pather Panchali was released in 1955 and the first in his “Apu” trilogy, was placed at number 15 in the BBC list. This list was culled out from a poll where over 200 critics from 43 countries picked a foreign language film. 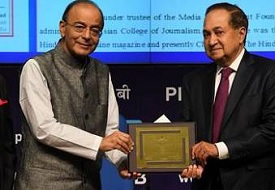 Mr. N. Ram, a Veteran Journalist and The Hindu publishing group chairman, has been chosen for the prestigious Raja Ram Mohan Roy Award. The awarded is presented by the Press Council of India (PCI), for the outstanding contribution towards the journalism.

Besides, the PCI also confirmed that the National Awards for Excellence in Journalism for 2018 and Ruby Sarkar, Chief Correspondent of Deshbandhu, Bhopal, and Rajesh Parshuram Joshte of Daily Pudhari, Ratnagiri, have been named joint winners for ‘Rural Journalism’. 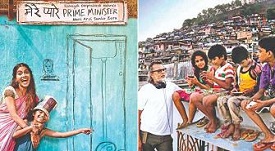 The Official Selection of the Rome Film Fest has presented three productions from three different continents. From Asia, it was Rakeysh Omprakash Mehra’s directorial film ‘Mere Pyaare Prime Minister,’ which was screened in Sala Petrassi. The film gathered an exceptional response with a standing ovation along with 4-star reviews at the event.

Mr. Mehra's upcoming film 'Mere Pyaare Prime Minister' has been creating waves worldwide even before its release. This film deals with the social issue of open defecation. 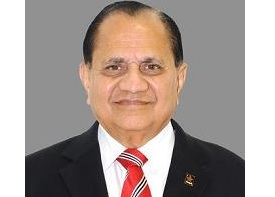 In recognition of his enormous contributions in the fields of Education and Healthcare, Dr. Ramdas M Pai has been given Lifetime Achievement Award, 2018 by the Federation of Indian Chambers of Commerce & Industry (FICCI).

Dr. Pai has contributed greatly to making the Manipal Brand a respected and trusted name not just in India but internationally as well. Therefore, the citation has described him as an epitome of dedication and perseverance.

Veteran actor Anupam Kher has been honored as a 'Distinguished Fellow' by IndiaGlobal - a leading think-tank. It is an organization that works on the issues relating to non-resident Indians.

Mr. Kher has received this award on November 3, 2018 at the 3rd IndiaGlobal Summit, which was held at the prestigious MIT Sloan School of Management in Boston. The summit was facilitated by MIT Sloan India Business Club. 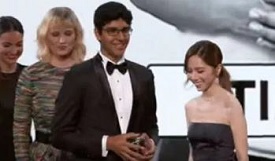 Sixteen-year old Samay Godika, who is a city school student, has won the fourth annual "Breakthrough Junior Challenge", a global science video competition. Soon he will receive $400,000 as educational prize for himself, his teacher, and his school, as he emerged as the winner.

A Class 11 student of National Public School, Koramangala, Bengaluru, Samay Godika represented the country and his school at the Breakthrough Junior Challenge this year and brought back the ultimate, science prize worth of Rs 2.9 crore for his video submitted in the life sciences category on circadian rhythms, which are physical, mental, and behavioural changes that follow a daily cycle. Samay won the award competing with 13 other finalists among roughly 8,000 entries. 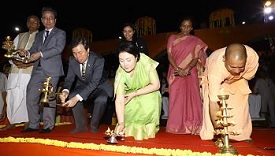 Yogi Adityanath, Chief Minister of Uttar Pradesh designed this year grand Diwali plans for Uttar Pradesh, as a result of which, the state pulled the global attention; likewise, the Ayodhya Deepotsav 2018 made its way into the Guinness Book of World Record. In this Deepotsav, 301,152 diyas, or earthen lamps, were lit on the banks of River Sarayu.

On the occasion, South Korean First Lady Kim Jung-sook, who was also the chief guest at the same event, arrived in Ayodhya to attend Diwali festivities and began her tour by offering tribute at the Queen Heo Memorial. Kim toured the site, along with Adityanath, and attended a ground-breaking ceremony for upgrade and beautification of the memorial dedicated to the legendary princess of Ayodhya who went to Korea. Ayodhya and Korea share a profound historical connection through Ayodhya’s Princess Suriratna, who married Korean King Suro in 48 CE.

Arunima Sinha, the Indian mountaineer who became the first amputee woman in the world to climb Mount Everest in 2013, has been awarded an honorary Doctorate by a prestigious UK university for her inspirational achievements.

The 30 years old Ms. Sinha, has been conferred with the honorary doctorate by the University of Strathclyde at a graduation ceremony in Glasgow on Tuesday. She was honored in the Barony Hall for her inspirational achievements in mountaineering. 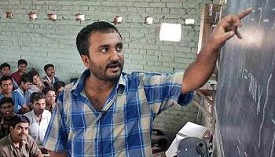 Anand Kumar, the Mathematician and the Founder of Super 30 has been awarded the ‘Global Education Award’ for his “revolutionary” contributions in the field of education and illuminating the lives of many talented students.

P A Ibrahim Haji, co-chairman Malabar Group, said that a 12-member jury shortlisted Mr. Kumar from a list of 100 names working in the field of education across the globe after a three-month research and consequent deliberations. Further he said that Anand Kumar has done a lot through Super 30 to bring about a generational change in those families and become an inspiration for the poor worldwide to pursue education to ward off poverty. It has underlined the power of education to transform lives. 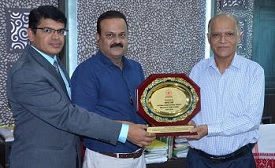 The Union government has honored the Assam Police for "good practices" under the Crime and Criminal Tracking Network & Systems (CCTNS). It is an e-governance project. The award was given for the citizen centric service delivery, in which the state police has automated passport verification and Permanent Residential Certificate (PRC) services by using the online CCTNS.

The Ministry of Home Affairs has also awarded Anil Kumar Jha, Special Director General (CID) of the force, for his outstanding contribution in implementing the project. 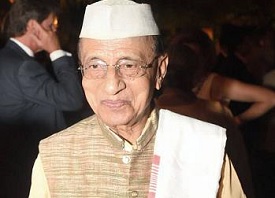 Jawahar Lal Sarin, the President of the governing body of Alliance Franaise, has been conferred with France's Highest Civilian Honor by French Ambassador to India Alexandre Ziegler at an event.

France's highest civilian honor 'Knight of the Legion of Honor' has been bestowed on Sarin in recognition of his outstanding contribution to enhancing Indo-French cultural cooperation and promoting the French language. 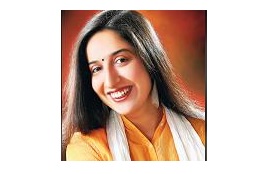 Swati Chaturvedi, an Indian freelance journalist, who has been the target of online trolling and harassment for her investigative reports, has conferred the ‘2018 London Press Freedom Award’ for her Courage.

Swati Chaturvedi also authored the book namely 'I am a Troll: Inside the Secret World of the BJP's Digital Army', beat shortlisted journalists from Italy, Turkey, and Morocco for her work that exposed the "IT cell" within the ruling Bharatiya Janata Party (BJP) for keeping an army of angry trolls.

Chaturvedi said, "This means a lot. But I think it is very sad that you have to win an award for courage just for doing your job."

The renewal of the early 20th-century Shijo-cho Ofune-hoko Float Machiya has received the Award of Excellence by UNESCO. This is the part of UNESCO’s Asia-Pacific Awards for Cultural Heritage Conservation. The Jury praised the Award of Excellence winner, Shijo-cho Ofune-hoko Float Machiya, for “celebrating Kyoto culture through safeguarding of the city’s endangered wooden townhouse typology as well as the iconic annual Gion Festival.

In this year’s award, ten projects from five countries – China, Australia, India, Japan, and Thailand – have been recognized by an International Jury of Conservation Experts. The Jury met in August in Penang, Malaysia to review 41 entries from eight countries across the Asia-Pacific region.

The UNESCO Asia-Pacific Awards for Cultural Heritage Conservation programme recognizes the focused efforts of private individuals and organizations that have successfully conserved structures and buildings of heritage value in the given geographic region. Therefore, the awards aimed to encourage other property owners to undertake conservation projects within their communities, either independently or by seeking public-private partnerships.

Further, the awarded projects illustrate a clear understanding and application of various criteria, such as the understanding of the place, technical achievement, and the project’s social and policy impact. 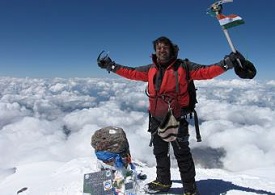 Indian mountaineer Satyarup Siddhanta became the first Indian to climb Mt Giluwe, the second highest mountain in Papua New Guinea. Mr. Satyarup has reached the summit of the mountain, which is at an elevation of 4,367 meters.

Including this, Satya now has scaled 5 of the 7 volcanic summits. In a few days, he will set out to summit Mt Wilhelm – the highest mountain of Papua New Guinea. After completing this, Satya - who is on a mission to popularize adventure sports among young Indians – would become the first from India to scale these two mountains.

At the 6th Indian Social Work Congress in New Delhi, late Dr. Martha Farrell has been honored with the "Lifetime Achievement Award." Dr. Farrell has been recognized for her lifelong work towards gender equality, women's empowerment, and prevention of sexual harassment at workplace.

Martha began her career in 1981 as a literacy worker at Ankur. Ankur is a Delhi based NGO working for women's literacy and empowerment. In 1991, she co-founded Creative Learning for Change, an NGO consisting of development professionals. The major works were research, training and documentation of learning materials for students, teachers and facilitators in non-formal settings. 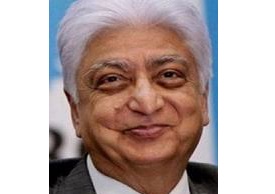 Wipro Chairman Azim Premji was conferred with Highest French Civilian Honour. The award has been honored to Azim Premji for his outstanding contribution to developing the information technology industry in India, his economic outreach in France, and his laudable contribution to society as a philanthropist (by Azim Premji Foundation and Azim Premji University).

The Legion d'Honneur (Legion of Honour), which has been instituted in 1802 by Napoleon Bonaparte, is the highest civilian award given by the French Republic for outstanding service to France, regardless of the nationality of the recipients.