India-UAE Partnership Summit (IUPS) that was recently held in Dubai, is a specifically designed conclave to promote investments from UAE to India and India to UAE. The focus sectors of this summit are investments in Education and SMEs/Startups. It also focuses on presentations by Indian States who are seeking investments.

This official meeting was hosted by Business Leaders Forum (a unit of India Trade & Exhibition Centre) in association with MSME Development Forum as SME event Partner and Indian Embassy-Abu Dhabi. The Consulate General of India-Dubai and UAE Ministry of Economy are the Strategic Partners.

The major highlights of the Summit are given below: 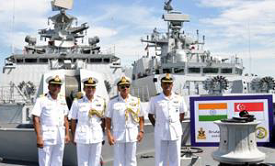 The 25th edition of SIMBEX, “Singapore-India Maritime Bilateral Exercise” is exercised off Andaman Sea and Bay of Bengal. In 1994, Bilateral cooperation between India and Singapore was first formalized. At that time, RSN ships began to train with the Indian Navy.

Supplementing India’s ‘Act-East’ policy, there have been a number of such agreements and high level visits in the recent past between these two countries. Resultantly, Indo-Singapore bilateral relations have been on upsurge in the recent past. Both countries have a full calendar of more than 20 bilateral mechanisms, dialogues and exercises. In November 2015, the robust relationship between the two countries was transformed into ‘Strategic Partnership’.

An Agreement to deal with Mutual Legal Assistance in reference to Criminal Matters was signed between Mr. Kiren Rijiju, Minister of State for Home on behalf of India and Mr. Mohamed Aujjar, Minister of Justice on behalf of the Government of Morocco.

The Agreement is designed to strengthen the bilateral cooperation with Morocco and enhance effectiveness and provide a broad legal framework for prevention, investigation and prosecution of crimes. The agreement will also assist in tracing, restraint, and confiscation of funds meant to finance terrorist acts.

INS Rana of the Eastern Fleet based at Visakhapatnam under the Eastern Naval Command has participated in the inaugural edition of Indian Navy & Indonesian Navy Bilateral Exercise ‘Samudra Shakti.’

The joint exercise has started with a Harbor Phase that was held between 12 and 15 November 2018 which convers planning and briefing on various activities, professional interactions, cross deck visits, sports fixtures and social interactions.

The objectives of this joint exercise are: 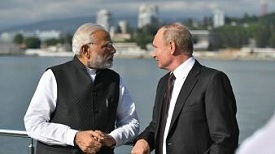 The maiden Indo-Russian Strategic Economic Dialogue was held in St. Petersburg during November 25th - 26th with an objective to explore new areas of partnership including artificial intelligence (AI), transport, and small and medium enterprises (SMEs) to expand strategic economic ties between the two countries.

Rajiv Kumar, the vice-chairman of NITI Aayog has led the Indian side at the dialogue. However, later PM Narendra Modi and President (Russia) Vladimir Putin agreed that the economic partnership between the two countries was not corresponded with the political relations. Likewise, the major areas of emphasis were - Transport, Agriculture and Agro-processing, Small and Medium Enterprises, Digital Transformation and Frontier Technologies, and Industrial Cooperation.