SAP Universe Design tool allows users to create, edit or delete existing models published in BO repository. With Universe Designer, you can build data foundation and business layer to meet your BI report requirements and perform different functions available in UDT tool before you develop BI reports and dashboards on top of these Universes. Universe Designer helps you to create semantic layer between your Relational database and BI tool.

With Universe Designer, you can build the semantic layer for non-SAP and SAP data sources to build data models for DB objects. Once Semantic later is built, you can publish it to BO server repository and it can be used by different users to create BI reports in Web intelligence/Desktop intelligence tool and also can be used with other SAP BusinessObjects tools.

The benefits of using Universe for BI reporting is that end users can connect to Universe and run queries against database without understanding the complexity of underlying data structures. BI users can use objects used in Universe to create reports. The advantage of using Universe is to provide easy to use interface to business users which are non-technical, and they can simply drag objects to BI reports and perform ad-hoc reporting without any technical knowledge.

Key Components of a Universe

The following are the key components of Universe −

In Universe, the grouping of objects is known as class. The name of class normally shows objects category it contains. You can also divide classes in to subclasses based on hierarchical structure.

In Universe, an object is named component derived from a data object in database. The name of the object is usually based on its relevance to business to users. For example, Objects used by customer should be represented as Customer in Universe layer however it can be referred to XYZ column in database.

In the below image, you can see common example of classes and objects in a Universe. They can be renamed as per requirement from business users.

Universe provides a semantic layer between data warehouse and reporting tool to translate source database objects to objects relevant for business users. It can contain all aggregations for measure values, custom calculations, user prompts and filters, and other business rules relevant for reporting and dashboard requirements.

All tables and joins are applied at Universe level, and business users can simply drag objects in query panel to create BI reports. 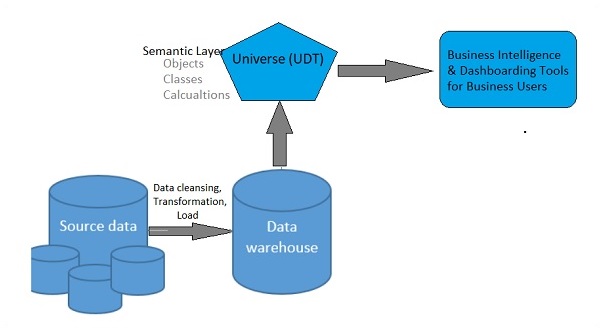