A bar of highly resistive n-type silicon, is considered to form the base structure. Two Ohmic contacts are drawn at both the ends being both the bases. An aluminum rod like structure is attached to it which becomes the emitter. This emitter lies near to the base 2 and a bit far to the base1. Both of these join to form a PN junction. As single PN junction is present, this component is called as a Unijunction transistor.

An internal resistance called as intrinsic resistance is present inside the bar whose resistance value depends upon the doping concentration of the bar. The construction and symbol of UJT are as shown below.

In the symbol, the emitter is indicated by an inclined arrow and the remaining two ends indicate the bases. As the UJT is understood as a combination of diode and some resistance, the internal structure of UJT can be indicated by an equivalent diagram to explain the working of UJT.

The UJT equivalent circuit is as given below. 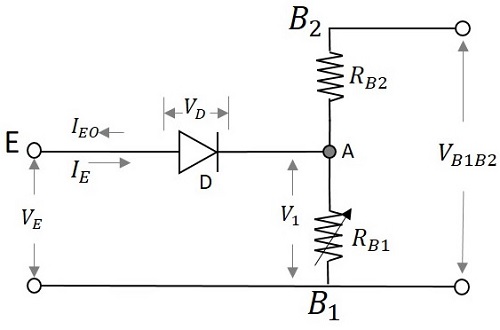 Initially when no voltage is applied,

Then the voltage VBB is applied through RB2. The diode D will be in reverse bias. The voltage across the diode will be VB which is the barrier voltage of the emitter diode. Due to the application of VBB, some voltage appears at point A. So, the total voltage will be VA + VB.

Now if the emitter voltage VE is increased, the current IE flows through the diode D. This current makes the diode forward biased. The carriers get induced and the resistance RB1 goes on decreasing. Therefore, the potential across RB1 which means VB1 also decreases.

As VBB is constant and RB1 decreases to its minimum value due to the doping concentration of the channel, VB1 also decreases.

The symbol η is used to represent the total resistance applied.

Hence voltage across VB1 is represented as

The emitter voltage is given as

Where VD is the voltage across the diode.

The concept discussed till now is clearly understood from the following graph shown below. 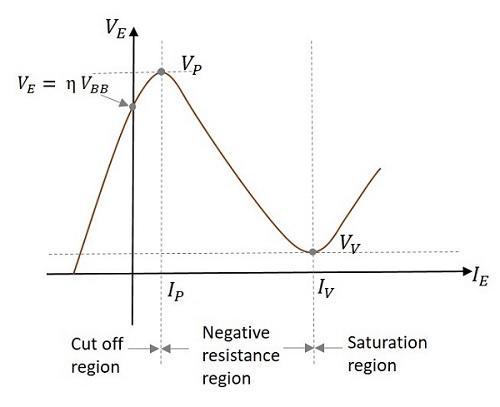 Initially when VE is zero, some reverse current IE flows until, the value of VE reaches a point at which

This is the point where the curve touches the Y-axis.

When VE reaches a voltage where

At this point, the diode gets forward biased.

UJTs are most prominently used as relaxation oscillators. They are also used in Phase Control Circuits. In addition, UJTs are widely used to provide clock for digital circuits, timing control for various devices, controlled firing in thyristors, and sync pulsed for horizontal deflection circuits in CRO.