Pulse Circuits - Transistor as a Switch

A transistor is used as an electronic switch by driving it either in saturation or in cut off. The region between these two is the linear region. A transistor works as a linear amplifier in this region. The Saturation and Cut off states are important consideration in this regard.

ON & OFF States of a Transistor

There are two main regions in the operation of a transistor which we can consider as ON and OFF states. They are saturation and cut off states. Let us have a look at the behavior of a transistor in those two states.

The following figure shows a transistor in cut-off region. 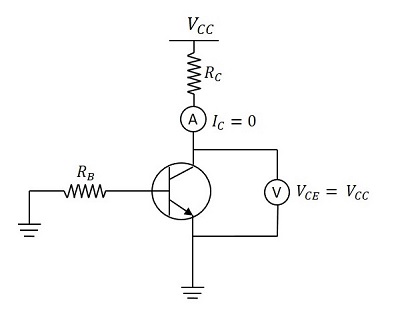 The following figure shows a transistor in saturation region. 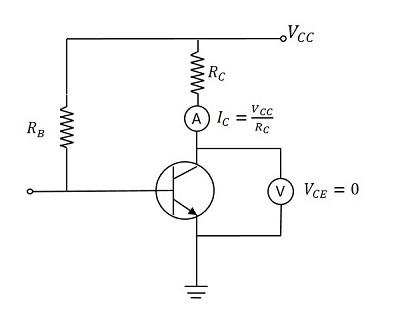 When the base voltage is positive and transistor goes into saturation, IC flows through RC.

Then VCC drops across RC. The output will be zero.

Actually, this is the ideal condition. Practically, some leakage current flows. Hence we can understand that a transistor works as a switch when driven into saturation and cut off regions by applying positive and negative voltages to the base. 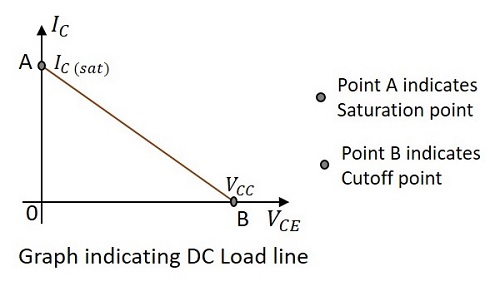 Observe the dc load line that connects the IC and VCC. If the transistor is driven into saturation, IC flows completely and VCE = 0 which is indicated by the point A.

If the transistor is driven into cut off, IC will be zero and VCE = VCC which is indicated by the point B. the line joining the saturation point A and cut off B is called as Load line. As the voltage applied here is dc, it is called as DC Load line.

Though the above-mentioned conditions are all convincing, there are a few practical limitations for such results to occur.

During the Cut off state

But in practice, a smaller leakage current flows through the collector.

Hence IC will be a few μA.

This is called as Collector Leakage Current which is of course, negligible.

During the Saturation State

But in practice, VCE decreases to some value called knee voltage.

As IC = βIB this decreases the collector current.

Switching Action of a Transistor

A Transistor has three regions of operation. To understand the efficiency of operation, the practical losses are to be considered. So let us try to get an idea on how efficiently a transistor works as a switch.

During Cut off (OFF) state

As ICEO is very small and VCC is also low, the loss will be of very low value. Hence, a transistor works as an efficient switch in OFF state.

During Saturation (ON) state

The output voltage is Vknee.

As Vknee will be of small value, the loss is low. Hence, a transistor works as an efficient switch in ON state.

The Switching transistor has a pulse as an input and a pulse with few variations will be the output. There are a few terms that you should know regarding the timings of the switching output pulse. Let us go through them.

When the input pulse is applied the collector current takes some time to reach the steady state value, due to the stray capacitances. The following figure explains this concept. 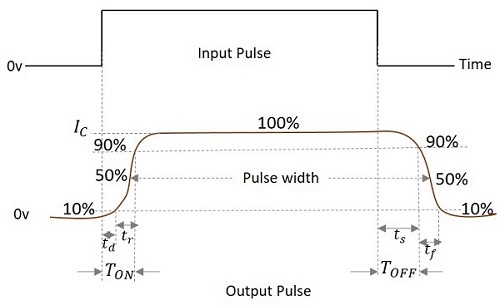 From the figure above,