A monostable multivibrator, as the name implies, has only one stable state. When the transistor conducts, the other remains in non-conducting state. A stable state is such a state where the transistor remains without being altered, unless disturbed by some external trigger pulse. As Monostable works on the same principle, it has another name called as One-shot Multivibrator.

One of the transistors, when gets into a stable state, an external trigger pulse is given to change its state. After changing its state, the transistor remains in this quasi-stable state or Meta-stable state for a specific time period, which is determined by the values of RC time constants and gets back to the previous stable state.

The following figure shows the circuit diagram of a Monostable Multivibrator. 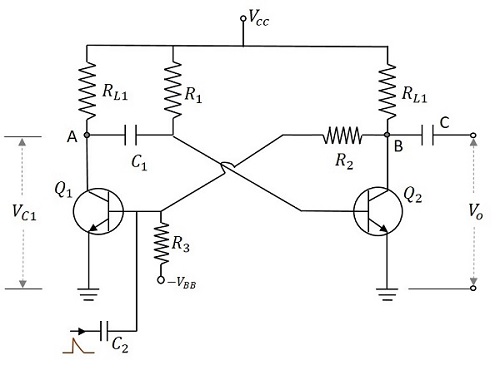 The output waveforms at the collectors of Q1 and Q2 along with the trigger input given at the base of Q1 are shown in the following figures. 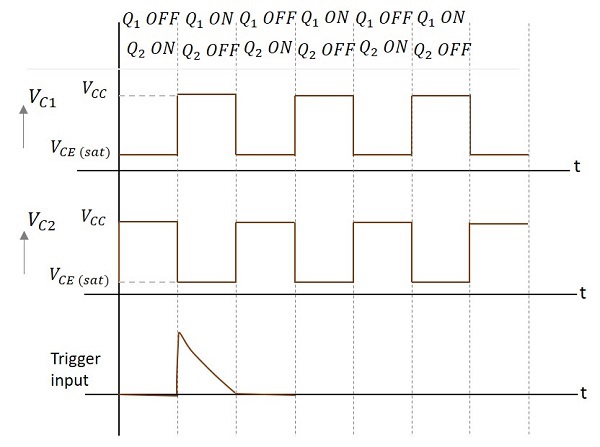 The width of this output pulse depends upon the RC time constant. Hence it depends on the values of R1C1. The duration of pulse is given by

The advantages of Monostable Multivibrator are as follows −

The major drawback of using a monostable multivibrator is that the time between the applications of trigger pulse T has to be greater than the RC time constant of the circuit.

Monostable Multivibrators are used in applications such as television circuits and control system circuits.