The transistor Miller time base generator circuit is the popular Miller integrator circuit that produces a sweep waveform. This is mostly used in horizontal deflection circuits.

Let us try to understand the construction and working of a Miller time base generator circuit.

The capacitor C placed between the base of Q1 and the emitter of Q3 is the timing capacitor. The values of R and C and the variation in the voltage level of VBB changes the sweep speed. The figure below shows the circuit of a Miller time base generator. 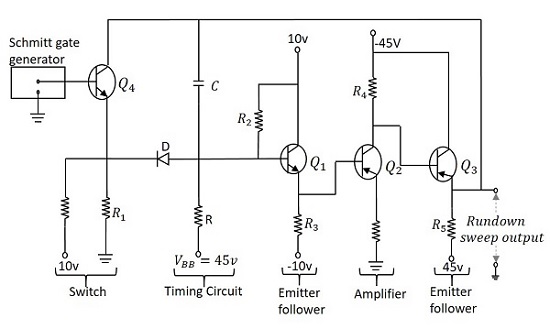 When the output of Schmitt trigger generator is a negative pulse, the transistor Q4 turns ON and the emitter current flows through R1. The emitter is at negative potential and the same is applied at the cathode of the diode D, which makes it forward biased. As the capacitor C is bypassed here, it is not charged.

Considering the effect of capacitance C1, the slope speed or sweep speed error is given by

Miller sweep circuits are the most commonly used integrator circuit in many devices. It is a widely used saw tooth generator.