The control signal is applied at the resistors. The output is taken across the load resistor. The figure below shows the circuit diagram for unidirectional diode sampling gate with more than one input signal. 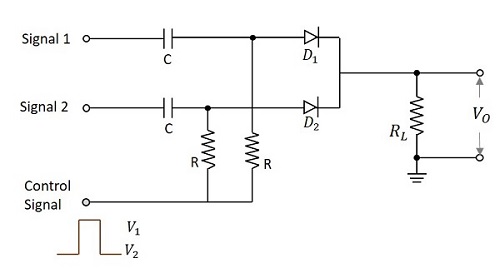 When the control input is given,

At VC = V1 which is during the transmission period, both the diodes D1 and D2 are forward biased. Now, the output will be the sum of all the three inputs.

Here we have a major limitation that at any instant of time, during the transmission period, only one input should be applied. This is a disadvantage of this circuit.

During the non-transmission period,

Both the diodes will be in reverse bias which means open circuited.

This makes the output

The main disadvantage of this circuit is that the loading of the circuit increases as the number of inputs increase. This limitation can be avoided by another circuit in which the control input is given after the input signal diodes.

While going through different types of sampling gates and the outputs they produce, we have come across an extra voltage level in the output waveforms called as Pedestal. This is unwanted and creates some noise.

Reduction of Pedestal in a Gate circuit

Hence it is the output observed because of the gating voltage though the input signal is absent. This is unwanted and has to be reduced. The circuit below is designed for the reduction of pedestal in a gate circuit. 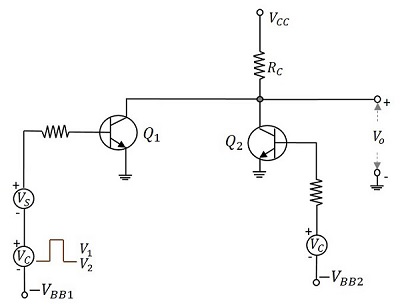 The figure below explains this in a better fashion. 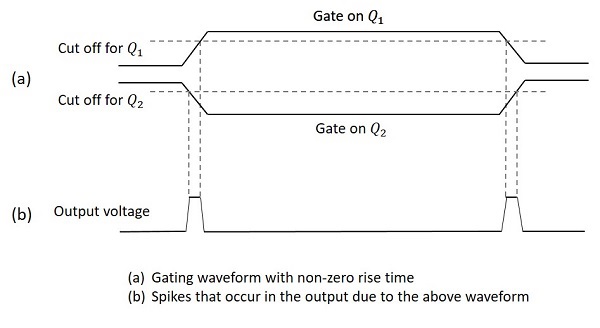 Hence the gate signals appear as in the above figure. The gated signal voltage will appear superimposed on this waveform. These spikes will be of negligible value if the gate waveform rise time is small compared with the gate duration.

There are few drawbacks of this circuit such as

Other than these drawbacks, this circuit is useful in the reduction of pedestal in a gate circuit.