Bidirectional gates, unlike unidirectional ones, transmit signals of both positive and negative polarities. These gates can be constructed using either transistors or diodes. From different types of circuits, let us go through a circuit made up of transistors and another made up of diodes. 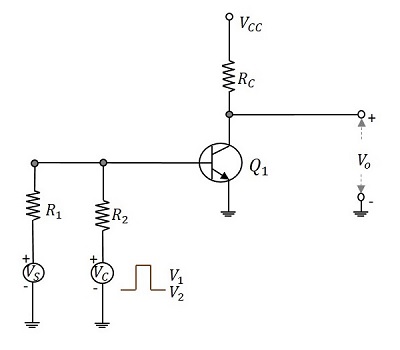 The control input VC applied here is a pulse waveform with two levels V1 and V2 and pulse width tp. This pulse width decides the desired transmission interval. The gating signal allows the input to get transmitted. When the gating signal is at its lower level V2, the transistor goes into active region. So, until the gating input is maintained at its upper level, signals of either polarity, which appear at the base of the transistor will be sampled and appear amplified at the output. 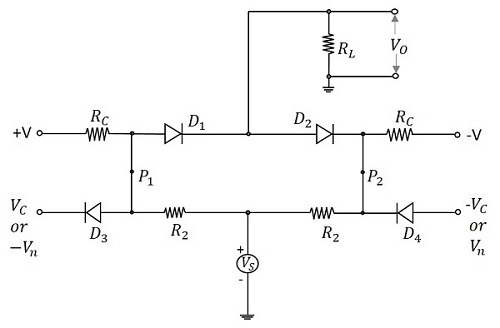 When the control voltages applied are Vn and –Vn, then the diodes D3 and D4 conduct. The points P2 and P1 are clamped to these voltages, which make the diodes D1 and D2 revere biased. Now, the output is zero.

During transmission, the diodes D3 and D4 are OFF. The gain A of the circuit is given by

Hence the choice of application of control voltages enables or disables the transmission. The signals of either polarities are transmitted depending upon the gating inputs.

There are many applications of sampling gate circuits. The most common ones are as follows −

In the sampling scope, the display consists of a sequence of samples of input waveform. Each of those samples are taken at a time progressively delayed with respect to some reference point in the waveform. This is the working principle of sampling scope which is shown below in the block diagram.

The ramp generator and the stair case generator generates the waveforms according to the trigger inputs applied. The comparator compares both of these signals and generates the output which is then given to the sampling gate circuit as a control signal.

While taking the samples, they are chosen at the time instants, which are progressively delayed by equal increments. The samples consist of a pulse whose duration is equal to the duration of the sampling gate control and whose amplitude is determined by the magnitude of the input signal at the sampling time. The pulse width then produced will be low.

Just like in the Pulse modulation, the signal has to be sampled and hold. But as the pulse width is low, it is amplified by an amplifier circuit so as to stretch and then given to a diode-capacitor combination circuit so as to hold the signal, to fill the interval of the next sample. The output this circuit is given to the vertical deflection plates and the output of sweep circuit is given to the horizontal deflection plates of the sampling scope to display the output waveform.