Magic commands or magic functions are one of the important enhancements that IPython offers compared to the standard Python shell. These magic commands are intended to solve common problems in data analysis using Python. In fact, they control the behaviour of IPython itself.

Magic commands act as convenient functions where Python syntax is not the most natural one. They are useful to embed invalid python syntax in their work flow.

There are two types of magic commands −

They are similar to command line calls. They start with % character. Rest of the line is its argument passed without parentheses or quotes. Line magics can be used as expression and their return value can be assigned to variable.

They have %% character prefix. Unlike line magic functions, they can operate on multiple lines below their call. They can in fact make arbitrary modifications to the input they receive, which need not even be a valid Python code at all. They receive the whole block as a single string.

This magic function makes a function automatically callable without having to use parentheses. It takes three possible mode parameters: 0 (off), 1 (smart) is default or 2 (always on). 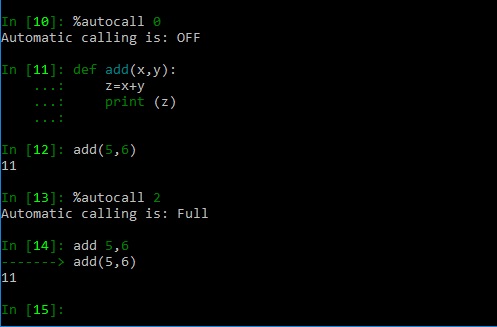 Magic functions are callable without having to type the initial % if set to 1. Without arguments it toggles on/off. To deactivate, set to 0. 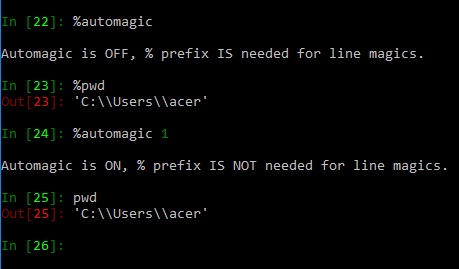 This line magic changes the current directory. This command automatically maintains an internal list of directories you visit during your IPython session, in the variable _dh. You can also do ‘cd -<tab>’ to see directory history conveniently. 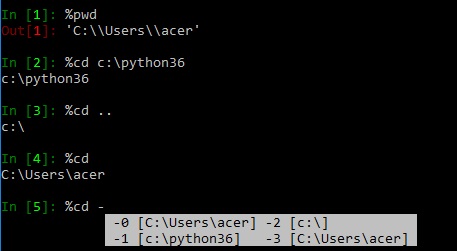 The %cd command can be used in the following ways −

This magic command prints all directories you have visited in current session. Every time %cd command is used, this list is updated in _dh variable.

This magic command calls upon the default text editor of current operating system (Notepad for Windows) for editing a Python script. The script is executed as the editor is closed.

The %cd command can be used in the following ways −

When used without argument this command enables or disables IPython GUI event loop integration. With GUINAME argument, this magic replaces the default GUI toolkits by the specified one. 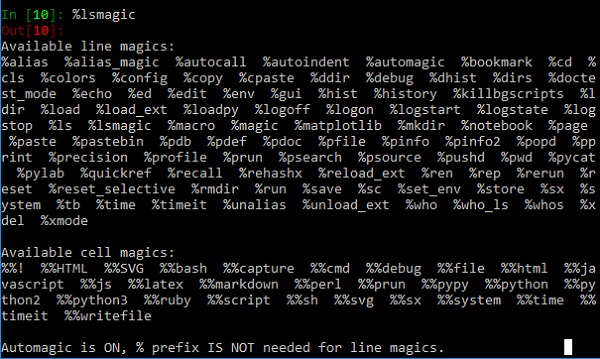 This function activates matplotlib interactive support during an IPython session. However, it does not import matplotlib library. The matplotlib default GUI toolkit is TkAgg. But you can explicitly request a different GUI backend. You can see a list of the available backends as shown −

This function converts current IPython history into an IPython notebook file with ipynb extension. The input cells in previous example are saved as sine.ipynb

This function is similar to object introspection ? character. To obtain information about an object, use the following command −

This is synonymous to object? or ?object.

This magic function restricts a floating point result to specified digits after decimal. 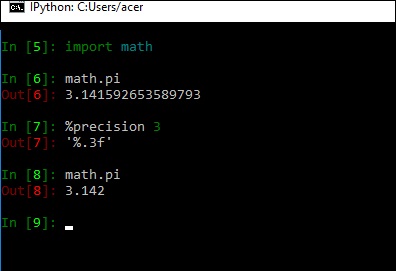 When executed without any parameter, this function executes previous command.

Note that in %recall n, number in front of it is input cell number. Hence the command in the nth cell is recalled. You can recall commands in section of cells by using command such as %recall 1-4. Current input cell is populated with recalled cell and the cursor blinks till the enter key is pressed.

This command runs a Python script from within IPython shell.

This command displays time required by IPython environment to execute a Python expression.

This function also displays time required by IPython environment to execute a Python expression. Time execution of a Python statement or expression uses the timeit module. This function can be used both as a line and cell magic as explained here −

This line magic prints all interactive variables, with some minimal formatting. If any arguments are given, only variables whose type matches one of these are printed. 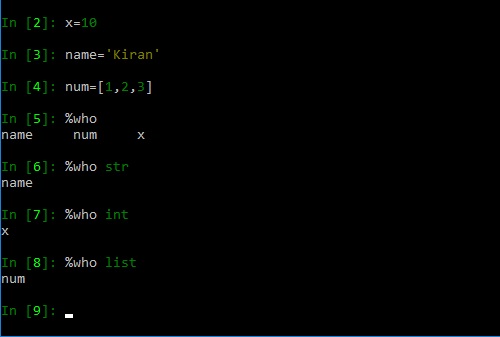