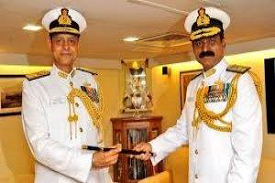 He was commissioned in the Executive Branch of the Indian Navy on 1st July 1985.

He commanded the National Coast Guard, Mauritius for two years (2003 - 05) and served as Commanding Officer of INS Mandovi. 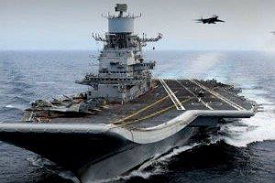 Third Installment of the Joint Naval Exercise of India and Australia AUSINDEX is to be held off the coast of Vishakhapatnam from April 2 to 16. The joint exercise will focus on anti-submarine warfare, as part of efforts to ramp up bilateral naval cooperation in the strategic Indian Ocean region.

From the Australian side, HMAS Canberra (landing helicopter dock), Auxiliary Oiler Replenishment vessel, two frigates, HMAS Newcastle and HMAS Parramatta and P81 and P8 maritime patrol aircraft, will be involved in the exercise. A Kilo-class submarine, land-based Hawk aircraft that will provide the air attack element for the exercise, a Kamorta class anti-submarine vessel, besides a stealth destroyer will lead the Indian deployment for the exercise. 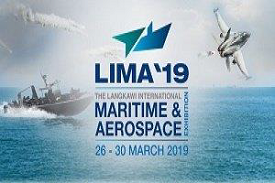 The event, that takes place once every two years, is one of the largest maritime and aerospace exhibitions in the Asia-Pacific.

Indian Air Force (IAF) is participating in the Maritime Aero Expo for the first time, during which it will display its indigenously developed LCA fighter aircraft, Tejas. 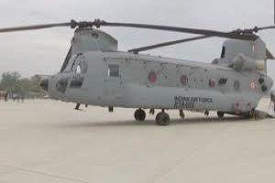 On the lines of Indo-US deal inked in September 2015 for the purchase of 15 Chinooks by India, the first four heavy lift CH-47F (I) Chinook helicopters were inducted in the Indian Air Force, at Air Force Station, Chandigarh, in Squadron No 126 Helicopter Flight. These multi-role helicopters will act as life-saver during HADR (humanitarian assistance and disaster relief) missions.

Regarded as one of the most modern heavy lift chopper, the payload capacity of Chinook is about 10 tonne, as it is able to lift artillery, vehicles, road construction and engineer equipment as well as troops and supplies to mountainous sectors. It can also lift M-777 ultra-light howitzers of the Indian armed forces.

India has purchased 15 Chinooks for $1.5 billion.

The delivery of remaining helicopters is expected to be completed by 2023. 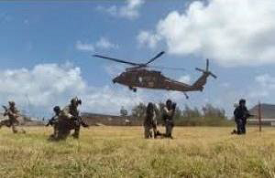 The US military forces and the Indian National Security Guard (NSG) is conducting joint exercises in Hyderabad.

This would be a part of the US-India security partnership.

The aim of these exercises is to enhance preparedness and tackle any crisis that affects the public health and safety.

The exercise is witnessing participation by the 1st Battalion and the 1st Special Forces Group (Airborne) stationed out of Okinawa, Japan.

The exercise will be overseen from the US Embassy, New Delhi and US Special Operations Pacific Command at Camp HM Smith in Hawaii. 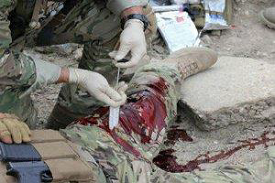 The Defence Research and Development Organisation (DRDO) has developed a range of combat drugs that can extend the golden hour till the soldier or an armoured unit is shifted to hospital after an attack. This range of drugs can bring down the death toll.

The spectrum includes bleeding wound sealants, super absorptive dressings, and glycerinated salines. It can save lives in the event of warfare in the jungle and high altitude areas as well as in terror attacks.

These medicines ensure that soldiers do not suffer from unwanted blood loss while being taken to better healthcare from war zones. This range of casualty drugs is aimed at enhancing the chances of survival and minimum disability by providing effective first aid care within the golden hour. 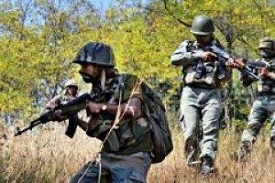 The Indian and Myanmar’s armies, in a coordinated operation, destroyed at least 10 camps belonging to an insurgent group in Myanmar, which had become a threat to India’s mega Kaladan Project in the neighbouring country.

The military action carried out was codenamed Operation Sunrise. 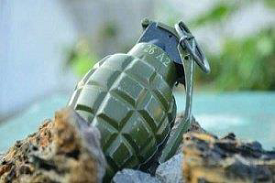 The Rs 500 crore proposal comes shortly after the Defence Ministry cleared the acquisition of assault rifles and signed a joint venture with Russia to manufacture AK-203 rifles for the infantry units of the Indian Army.

The new hand grenades will replace the existing inventory, HE-36 grenades manufactured by the Ordnance Factory Board.

The Defence Research and Development Organisation (DRDO) have developed the multi-mode grenades.

Recently, the government also signed a contract worth Rs 700 crore for procurement of 70,000 Sig Sauer assault rifles with a US manufacturer. 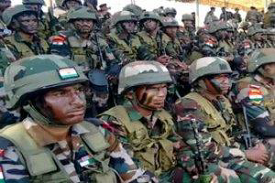 India and Sri Lanka is to conduct joint military exercise Mitra Shakti VI from 26 March to 8 April at Sri Lanka.

At the Military Exercise Mitra Shakti VI India would be represented by the Bihar Regiment. Gemunu Watch Battalion of Sri Lankan Army will be representing the Sri Lankan side.

The exercise aims to build and promote close relations between armies of both the countries and to enhance the ability of joint exercise commander to take military contingents of both nations under command. The exercise also involves tactical level operations in an international Counter Insurgency and Counter Terrorist environment under the United Nations mandate. 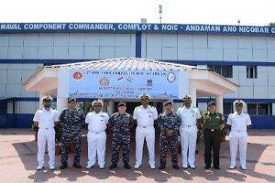 The 33rd edition of India-Indonesia coordinated patrol (IND-INDO CORPAT) was inaugurated at Port Blair, Andaman & Nicobar Islands. The IND-INDO CORPAT 2019 is held from 19 Mar to 04Apr 2019.

Navies of both countries have been carrying out coordinated patrolling twice a year since 2002 in an effort to keep the Indian Ocean region (IOR) safe and secure for commercial shipping and international trade. It also enhances mutual understanding and interoperability between the two navies.

From the Indonesian Side Naval Ship, KRI Sultan Thaha Syaifuddin and Maritime Patrol Aircraft CN-235are taking part. Commodore Ashutosh Ridhorkar, Naval Component Commander, Andaman and Nicobar Command is leading the Indian side. During the exercise ships and aircraft from both the countries would undertake the patrolling on the respective sides of 236 nautical miles long International Maritime Boundary line. 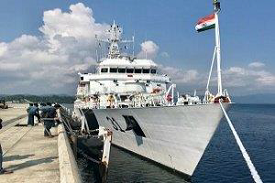 This visit of the coast guard ship follows the first-ever-visit of Naval Ship INS Sumitra to Sabang in July 2018.

Vijit's visit to Sabang, Indonesia, also highlights strengthening cooperation in the area of maritime security and safety between New Delhi and Jakarta.

ICGS Vijit is the 2nd in the series of 90 meter Offshore Patrol Vessels and was commissioned at Goa on 11 Dec 2010.

'Vijit' meaning "Winner or Victorious" is the testimony of India's shipbuilding capabilities and the resolve of Govt of India to safeguard country's maritime interests. 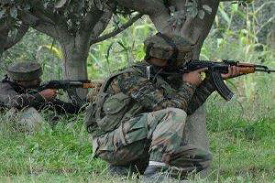 The decision to hold Sary-Arka-Antiterror 2019, the first joint military exercise of Shanghai Cooperation Organization (SCO) was announced at the during the 34th meeting of the RATS council held in Tashkent, Uzbekistan. The exercise will be held at Sary Arka in Kazakhstan. 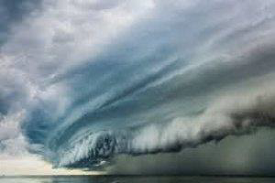 India decides to divert three Indian naval ships to the port city of Beira in Mozambique to provide humanitarian assistance to the people affected by tropical cyclone ‘#IDAI’.

The coastal city of Beira on Friday, 15 March.

The city's power grid has currently crashed, the airport has been shut and most roads are inaccessible.

The Navy Spokesperson tweeted about the mission and on being the first-respondents for disaster relief. 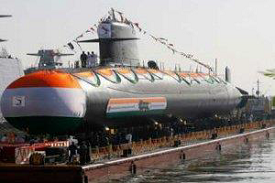 The Navy is set to induct the second Scorpene submarine Khanderi by early May. The remaining submarines in the series are in advanced stages of manufacturing and trials. Khanderi was launched into the water in January 2017 and has since been undergoing a series of trials.

Also, the fourth submarine Vela is ready to be launched into the water for trials around the same time depending on the ocean tide.

Mazagon Dock Limited (MDL), Mumbai, is manufacturing six Scorpene submarines under technology transfer from Naval Group of France under a 2005 contract worth $3.75 bn. After a series of delays in the project, the first submarine of the class Kalvari joined service in December 2017. The entire project is expected to be completed by 2020. 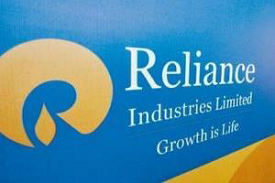 Africa-India Joint Field Training Exercise (AFINDEX-19) between the Indian Army and 16 African nations will be conducted in Pune from March 18 to 27. The joint exercise will be held at Pune's Foreign Training Node at Aundh Military Station and College of Military Engineering in Kirkee.

10 personnel, each from the participating nations from the African continent and personnel of Maratha Light Infantry of the Indian Army will participate in the joint exercise

The exercise aims to train the participating contingents in Humanitarian Mine Assistance (HMA) and Peace Keeping Operations (PKO) under the United Nations Charter. According to the latest report published by the Stockholm International Peace Research Institute (SIPRI), India was the world’s second largest importer of major arms in 2014-18 and accounted for 9.5% of the global total. Saudi Arabia , which holds the long-held tag as largest importer, accounted for 12% of the total imports during the period. 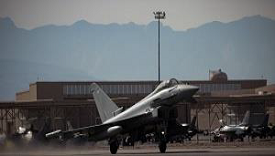 Red Flag is US Air Force’s premier air-to-air combat training exercise. It was launched in 1975. 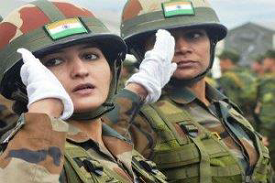 The Defence Ministry announced that permanent commission will be granted for Women in all the 10 branches of Indian Army. The extension of Permanent Commission to Women will provide women with a career in the Army until their retirement. The Short Service Commission entails an opportunity to serve as a Commissioned Officer for 10/14 years. At the end of 10 yrs, 3 options will be provided, either elect for a Permanent Commission or opt out or have the option of 4 years extension.

The Women Officers will now get a permanent commission in branches such as signals, engineers, army aviation, army air defence, electronics, and mechanical engineers, army service corps, army ordnance corps, and intelligence. The Defence Ministry had earlier approved permanent commission for women in all branches of Air Force including fighter pilots. 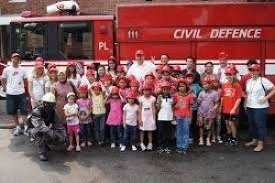 World Civil Defence Day is observed on 1st March every year, all over the world.

The theme of this year’s World Civil Defence Day was“Children’s safety, our responsibility”.

The International Civil Defence Organisation (ICDO) incorporated this day in 1990.