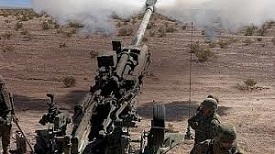 India signed a government-to-government deal with the U.S. for 145 M-777 Ultra-Light Howitzers worth $750 million under the Foreign Military Sales Program. This is the first major artillery deal signed by India after the Bofors scandal of the late 1980s.

The first lot of 25 guns will come to India in a fly away condition. The rest will be assembled in India in partnership with Mahindra. The manufacturer of the gun, BAE Systems, will invest about $200 million in India as offsets. 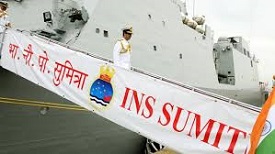 The Indian Navy’s Offshore Patrol Vessel Sumitra has reached Darwin, Australia. The ship is on her return passage to India after participating in the Royal New Zealand Navy International Naval Review 2016.

The three-day visit aims at strengthening bilateral ties and enhancing maritime security cooperation between the two countries. Sumitra, is the fourth of the Saryu class patrol ships, based on an indigenous design. Since commissioning in 2014, the most notable Operation has been Operation Rahat, which entailed the evacuation of personnel of various nationalities from war-torn Yemen in 2015. 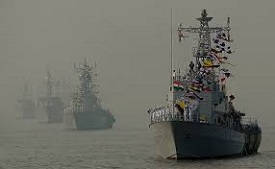 The Indra NAVY-2016 consisted of two stages – coastal and naval. The coastal part was held from December 14th – 18th in the city of Visakhapatnam, while the naval part took place in the Bay of Bengal from December 19th – 21st. At least three vessels from each side will participate in the drills. 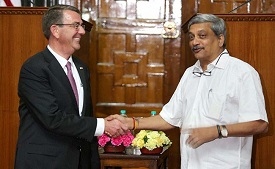 The United States designated India as its "Major Defense Partner". This was announced in the India-US joint statement on the United States Secretary of Defence Ashton Carter’s visit to New Delhi.

It is a status unique to India and has been made a part of the India Amendment in the National Defense Authorization Act, 2017 (NDAA), approved by the US Congress. The status will help facilitate defense trade and technology sharing between the countries.

India has signed an agreement with Vietnam to train the pilots of Vietnam's fleet of Russian-made Sukhoi Su-30MK2 'Flanker F' multirole combat aircraft. The agreement was signed in New Delhi by the Indian Defence Minister Manohar Parrikar and his Vietnamese Counterpart, General Ngo Xuan Lich.

The training of the fighter pilots from the Vietnam People's Army Air Force (VPAAF) by Indian Air Force (IAF) instructors is set to start in early 2017.

The KONKAN 16, the 2016 Edition of the Annual Bilateral Maritime Exercise between the Indian Navy and the Royal Navy, was held at Mumbai and Goa. Exercise KONKAN, named after the Western Coastal Region of India, was institutionalized in 2004. 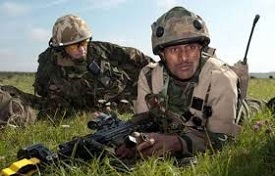 The Seventh edition of the Exercise EKUVERIN was held from the 15th to 28th December 2016 at Kadhdhoo, Laamu Atoll, Maldives. The Exercise was a 14-day platoon level joint military exercise between the Indian Army & the Maldives National Defence Force conducted on a yearly basis.

The aim of the exercise is to conduct military training with emphasis on amphibious & counter insurgency/ counter terrorism operations with a view to enhance interoperability between the two armies. The previous edition of the exercise was held in India at Trivandrum, Kerala. 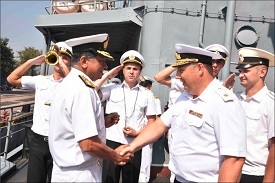 INDRA NAVY, an annual bilateral maritime exercise between Indian Navy and Russian Navy was conducted in the Bay of Bengal from 14th to 21st December 2016. The primary aim of exercise INDRA NAVY-16 was to increase inter-operability amongst the two navies and develop procedures for maritime security operations.

The scope of the exercise includes wide-ranging professional interactions in harbor phase and a diverse canvas of operational activities across a spectrum of maritime operations at sea. 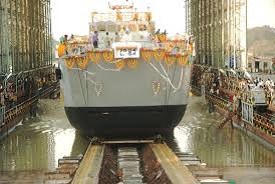 This LCU-L58 can displace 830 tonnes and can be deployed for multirole activities like beaching operations for landing troops ashore, humanitarian aid and disaster relief operations and evacuation of personnel from distant islands. It is armed with two CRN 91 naval guns, two heavy machine guns, four medium machine guns and portable air defence system. 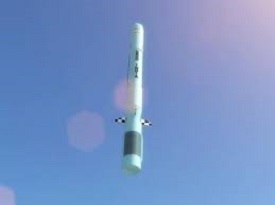 India successfully test-fired its home-grown long range subsonic cruise missile Nirbhay from the Integrated Test Range (ITR) at Chandipur on sea off the Odisha coast. The surface-to-surface missile is developed by the Defence Research and Development Organisation.

Nirbhay can carry conventional and nuclear warheads. It has a range of more than 1000 kms, weighs about 1500 kgs and has a length of 6 meters. It is difficult to be detected by the enemy’s radars. Nirbhaya was first test fired on March 12, 2013 from the ITR. 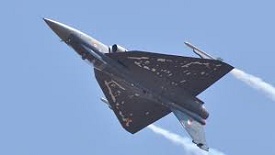 The Defence and Research Development Organization, DRDO has successfully flight tested the Smart Anti-Airfield Weapon, SAAW, from an Indian Air Force aircraft. The flight test was conducted at the integrated test range in Chandipur, Odisha.

SAAW is an indigenously designed and developed 120 kilograms’ class Smart Weapon, developed by DRDO. It is capable of engaging ground targets with high precision up to a range of 100 kilometres. The light weight high precision guided bomb is one of the world class weapons systems. 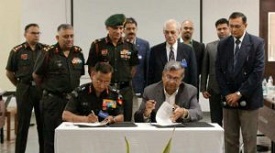 Indian Army has inked an MoU with the IIT Gandhinagar to set up a research and development (R&D) cell at the IIT campus. The two parties will collaborate in areas including critical technology requirements of Indian Army and sharing of professional and technical knowledge.

The research cell will help identify problems and possible solutions for the Indian Army. Indian Army will also conduct short term courses and lectures at the institute.