Feistel Cipher is not a specific scheme of block cipher. It is a design model from which many different block ciphers are derived. DES is just one example of a Feistel Cipher. A cryptographic system based on Feistel cipher structure uses the same algorithm for both encryption and decryption.

The encryption process uses the Feistel structure consisting multiple rounds of processing of the plaintext, each round consisting of a “substitution” step followed by a permutation step.

Feistel Structure is shown in the following illustration − 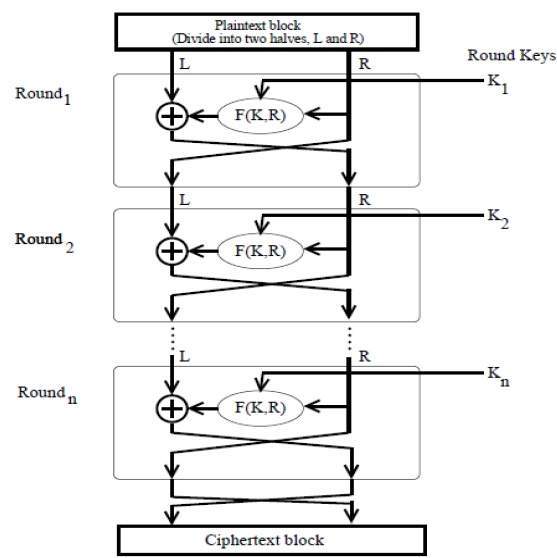 The difficult part of designing a Feistel Cipher is selection of round function ‘f’. In order to be unbreakable scheme, this function needs to have several important properties that are beyond the scope of our discussion.

The process of decryption in Feistel cipher is almost similar. Instead of starting with a block of plaintext, the ciphertext block is fed into the start of the Feistel structure and then the process thereafter is exactly the same as described in the given illustration.

The process is said to be almost similar and not exactly same. In the case of decryption, the only difference is that the subkeys used in encryption are used in the reverse order.

The final swapping of ‘L’ and ‘R’ in last step of the Feistel Cipher is essential. If these are not swapped then the resulting ciphertext could not be decrypted using the same algorithm.