A block cipher processes the data blocks of fixed size. Usually, the size of a message is larger than the block size. Hence, the long message is divided into a series of sequential message blocks, and the cipher operates on these blocks one at a time.

This mode is a most straightforward way of processing a series of sequentially listed message blocks.

The ECB mode is deterministic, that is, if plaintext block P1, P2,…, Pm are encrypted twice under the same key, the output ciphertext blocks will be the same.

In fact, for a given key technically we can create a codebook of ciphertexts for all possible plaintext blocks. Encryption would then entail only looking up for required plaintext and select the corresponding ciphertext. Thus, the operation is analogous to the assignment of code words in a codebook, and hence gets an official name − Electronic Codebook mode of operation (ECB). It is illustrated as follows −

For example, if a ciphertext from the ECB mode is known to encrypt a salary figure, then a small number of trials will allow an attacker to recover the figure. In general, we do not wish to use a deterministic cipher, and hence the ECB mode should not be used in most applications.

The operation of CBC mode is depicted in the following illustration. The steps are as follows −

Advantage of CBC over ECB is that changing IV results in different ciphertext for identical message. On the drawback side, the error in transmission gets propagated to few further block during decryption due to chaining effect.

In this mode, each ciphertext block gets ‘fed back’ into the encryption process in order to encrypt the next plaintext block.

The operation of CFB mode is depicted in the following illustration. For example, in the present system, a message block has a size ‘s’ bits where 1 < s < n. The CFB mode requires an initialization vector (IV) as the initial random n-bit input block. The IV need not be secret. Steps of operation are −

CFB has a very strange feature. In this mode, user decrypts the ciphertext using only the encryption process of the block cipher. The decryption algorithm of the underlying block cipher is never used.

Apparently, CFB mode is converting a block cipher into a type of stream cipher. The encryption algorithm is used as a key-stream generator to produce key-stream that is placed in the bottom register. This key stream is then XORed with the plaintext as in case of stream cipher.

On the flip side, the error of transmission gets propagated due to changing of blocks.

It involves feeding the successive output blocks from the underlying block cipher back to it. These feedback blocks provide string of bits to feed the encryption algorithm which act as the key-stream generator as in case of CFB mode.

The key stream generated is XOR-ed with the plaintext blocks. The OFB mode requires an IV as the initial random n-bit input block. The IV need not be secret.

The operation is depicted in the following illustration − 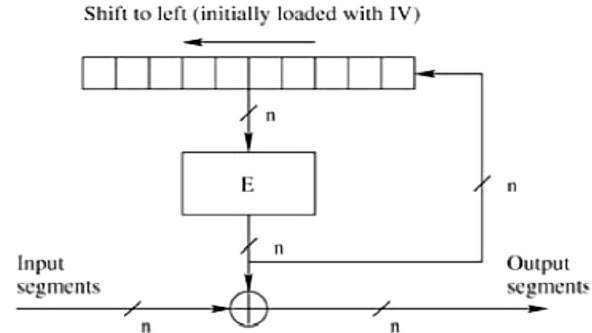 It can be considered as a counter-based version of CFB mode without the feedback. In this mode, both the sender and receiver need to access to a reliable counter, which computes a new shared value each time a ciphertext block is exchanged. This shared counter is not necessarily a secret value, but challenge is that both sides must keep the counter synchronized.

Both encryption and decryption in CTR mode are depicted in the following illustration. Steps in operation are − 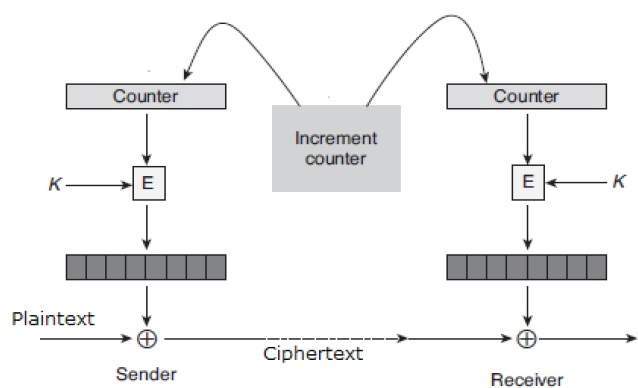 It does not have message dependency and hence a ciphertext block does not depend on the previous plaintext blocks.

The serious disadvantage of CTR mode is that it requires a synchronous counter at sender and receiver. Loss of synchronization leads to incorrect recovery of plaintext.

However, CTR mode has almost all advantages of CFB mode. In addition, it does not propagate error of transmission at all.