What is WAN (Wide Area Network) in Computer Network?

A wide area network is a connection of two or more computers that are geographically disappearing. It has a long-distance connection than LAN. It uses public networks like a telephone system or microwave broadcast for connection facilities.

Following are the types of WAN −

Enterprise WAN − These computers are located in different geographical regions that belong to one organization. It is for authorized persons only.

Global WAN − It belongs to a different group of organizations. It is accessible to everyone. It is created by both LANs and MANs.

They use radio waves, microwaves or communication satellites for data transmission. The hardware components required for WAN include Bridges, Routers, Gateways, and X.25 standard interfaces.

The bridge is hardware that communicates two or more local area networks to form a wide area network. Generally, the LANs connected by it use the same network protocol, but they can be used with two LANs having different wiring or network protocols.

The bridge performs at the data link layer of the OSI reference model. It handles the traffic flow between two LANs by learning the address of each data packet received by it. The number of transforming needed at the bridge is minimum because all the devices help the equal protocol. If the interval between two LANs is huge, exact bridges at either end of connection links are employed.

A router is a particular type of hardware device which connects two or more dissimilar LANs to form a WAN. They perform at the Network Layer of the OSI reference model. The LANs connected can use similar or different network protocols. They compute the best routes for data messages packets based on the devices participating in the routing protocol. 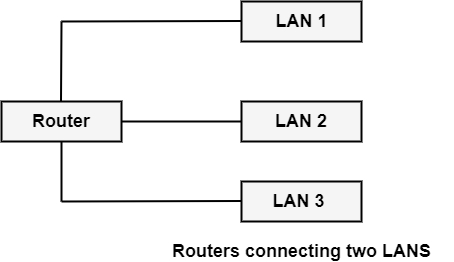 Gateways are used to attach two dissimilar LANs. It is a shared network between a LAN and a huger system, including a mainframe computer or a huge packet switching network. The communication protocols of all of them are different. They are quiet than a bridge or router. It has its processor in it, and it is a mixture of hardware and software both. It contains memory that is used to perform protocol conversions. The gateway performs on the Application layer of the OSI model.

Brouter − It is another networking device that connects the nature of a bridge and a router. It can route one or more specific protocols, i.e., it can use two or more similar or dissimilar LANs to form a wide area network.

X.25 − It is a protocol that is used to link to a Public Packet-switched network. It does not implement a network interfaces a network.