What is MultiDrop Network Topology in Computer Network?

A fully interconnected network was limited in this topology by using an individual cable around all nodes. Thus in this topology, only one line is shared by all nodes. Whenever any network transmits a message, it keeps both the sender address and the destination or receiver address as tags.

The message rides on the single line, and as the receiver receives the message, it acknowledges in the response of the same message on same on the line along with both addresses. Before sending a message, it is always checked whether the connection line is free or not. If the line is free, the message along with address tags is broadcasted on the line. As it travels online, each computer checks either it is sent to it. Finally, it is picked by the address computer, which sends an acknowledgement to the sender and frees the line. In case of failure of a node (receiver), the message goes back and is picked by the sender. The topology is shown in the figure. This is also known as the broadcasting network. 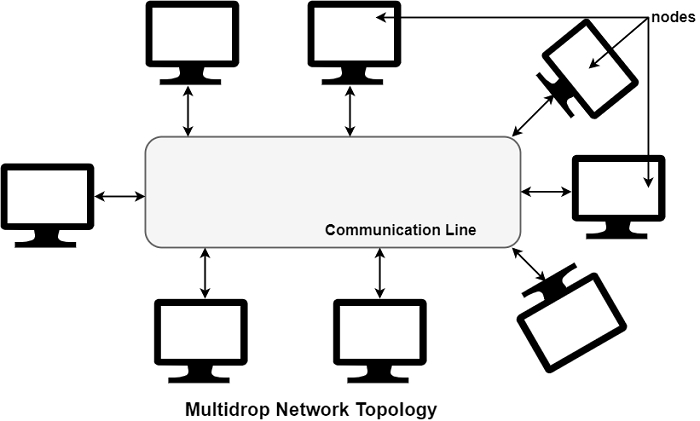 There are various advantages of the multidrop network topology, which are as follows −

There are various disadvantages of the multidrop network topology, which are as follows −