What is the significance of burning Holika during Holi festival?

Holi festival is a symbol of celebrating the trust in God that he bestows us with happiness at the end. Holi is a two-day festival, of which the first day is Holika Dahan and the second one is Colour-wali Holi. The day of Holika Dahan is celebrated by burning the effigy of Holika. The significance of this tradition has its roots following a tale from Hindu Mythology. 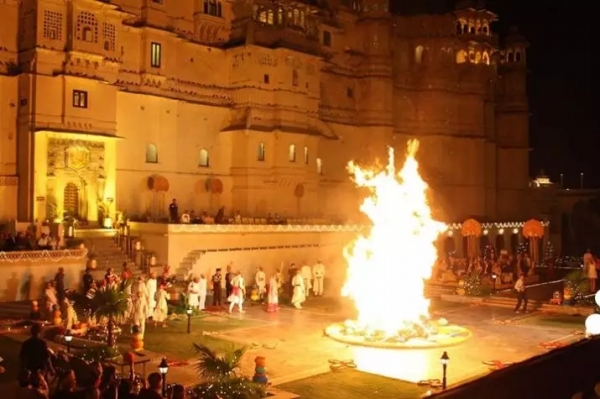 According to Hindu Mythology, there was a demon king called as Hiranyakasyapa who believes himself to be a god. His wife Leelavathi was an ardent devotee of Lord Vishnu but never argues and disobeys her husband and serves to be a loyal wife.

When she got pregnant, it happens that Hiranyakasyapa was out for penance and leaves his wife at the ashram of Narada Maharshi. As Narada is a great devotee of Lord Vishnu, he eventually used to recite the Narayana mantra always. Leelavathi and the baby boy in her womb used to enjoy the mantras, songs, and stories of Lord Vishnu very much, that the baby boy becomes a fervent admirer and believer of Lord Vishnu.

Only Lord is Vishnu

Even after returning to the king’s palace, the little prince, who was named as Prahlaad, never forgets reciting Lord Vishnu’s name. The King comes to know about this and he appoints teachers to teach the little prince that there is no god except his dad. But this Prahlaad is reluctant and adamant, that he keeps on praising Lord Vishnu and sings his compassion towards his devotees.

Hiranyakasyapa tries many ways to distract his son from Vishnu’s thoughts. Frustrated by Prahlaad’s adamancy, he believes that Lord Vishnu has taken over his son to defeat him and determines to kill Prahlaad. 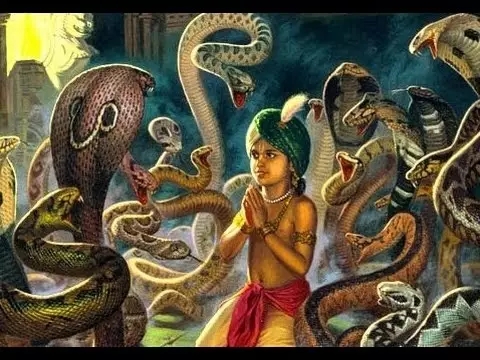 The king puts him to death by leaving amid of venomous snakes, throwing into a sea, rolling off a mountain etc. where the little devotee always gets saved by Lord Vishnu. His strong belief makes Lord Vishnu stand by his side always.

Hiranyakasyapa feels that Vishnu is saving this little boy to prove his strength over him and hence vanishing Prahlaad from dangers. Now he plans in such a way that there is no escape for Prahlaad. Holika is the demon sister of Hiranyakasyapa who has a boon that she won’t get hurt in the fire. So, the frustrated father makes the little child sit on the lap of his aunt Holika, who sits on a heap of dry grass. They burn the whole heap thinking that Holika will remain safe while Prahlaad gets burnt. But to their horror and astonishment, Holika gets burnt into ashes while Prahlaad who keeps on reciting the Lord Vishnu’s name doesn’t get hurt at all. 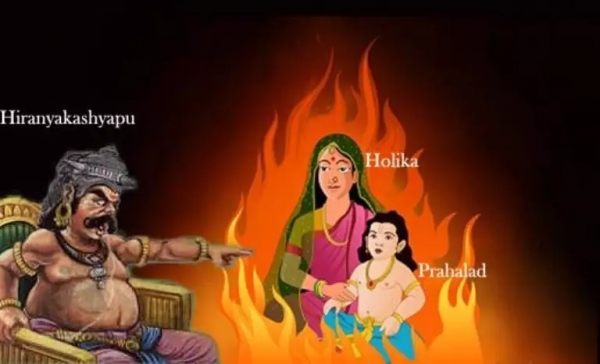 This incident is celebrated as a victory of the belief in god. Like Holika who used her virtues for hurting the innocent gets burnt, it is believed that those who hurt pure and innocent souls, get destroyed by their own vices.

The next day of Holika burning is celebrated as the colors festival Holi which indicates all the emotions of life and spreads a message of positivity, by sprinkling colors on each other.