What is the significance of Red Fort?


The Red Fort is located in the city of Delhi in India. It has a great history as it was the main residence of Mughal emperors for nearly 200 years (until 1857).

The red fort is the center of Delhi and it houses a large number of museums. Not only the accommodation for the emperors but also it was the center for Mughal state politics and for setting events that impact the region critically. Its construction was started in the year 1639 by the 5th Mughal emperor Shah Jahan as the place of his fortified capital Shahjahanabad. The name Red Fort comes from its huge enclosing walls made of red sandstone. It is connected by a water channel known as the stream of paradise.

It is one of the oldest and famous monuments of Old Delhi, locally known as Lal Quila. On one side it faces the city with its wall standing about 33 meters tall and stands 18 meters tall on the riverside, facing the Yamuna. The structure was listed as one of World Heritage Site by UNESCO in 2007.

Historically, it marked an important era, the shift, and concentration of power to Delhi. It was built in 1648 by Shahjahan. The construction actually started in 1638-39 when the Mughal ruler Shahjahan decided to shift his capital from Agra to Delhi. It was originally known as Qila-I-Mubarak or the Blessed Fort as it was the residence of Shahjahan and his royal family. Every year on August the 15th, since India got its independence from British Raj in 1947, Red Fort hosts Independence Day celebrations. The Prime Minister of India hoists the national flag above the Lahore Gate of Red Fort and addresses the nation. 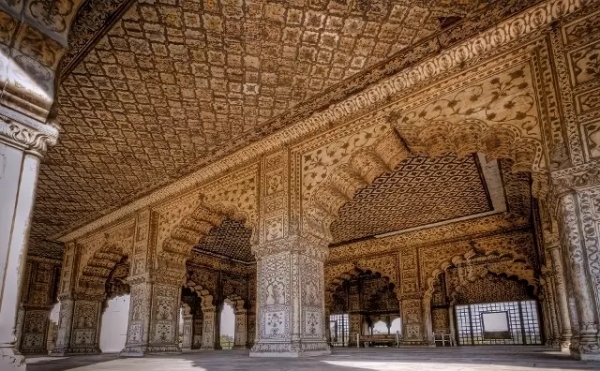 This fort is visited by thousands of tourists every day. The fort welcomes them with its many attractions. One of the fascinating tourist attraction here is the light and music show held every evening here. The show is of one-hour duration and conducted in English and Hindi languages with a half an hour interval. It takes the audience through key historical events of Delhi, right from the time of Mahabharat and Pandavas to the years of the British rule in India.

It takes you through the times and eras of various Rajput and Mughal rulers and kings of India like Prithviraj Chauhan, Humayun, and Bahadur Shah Zafar. Chatta Chowk, a bazaar or a market inside the Fort is another attraction. The interior area of the Red Fort has many sections like Diwan-I-Khaas, Diwan-I-Aam, Khas Mahal and Rang Mahal. Lahore Gate and Delhi Gate are the two gates of the Red Fort.

The fort remains open from Tuesdays to Sundays, closed on Mondays only. The fort is located on Netaji Subhash Marg in Old Delhi with Chandni Chowk metro station as the nearest one.