What is the significance of Ajanta Caves?

The UNESCO Heritage site of Ajanta caves is located in Aurangabad, Maharashtra. These caves were excavated as a part of the first wave of cave architecture in India. It became an important center for Buddhist religion and art under the enlightened patronage of the Vakataka rulers. However, it is important to note that the excavations of these caves happened in different phases in different time periods beginning in the 2nd Century.

The aerial view of the site looks like a horseshoe. This site was abandoned during the 6th-7th centuries and was rediscovered only during the British period by an Army officer named John Smith (1819).

The intricate carvings, roofs, pillars, stupas, assembly halls, etc. from the distinct essence of the architecture of Ajanta Caves. There are twenty-nine caves in Ajanta with Chaityas and Viharas as the two dominant types. Chaityas house the stupas and served as the centers for worship while Viharas served as the monastery for study and learning.

Cave nos. 9, 10, 12 and 13 are dated to the early phase. The upper and lower phase caves are 6, 11 and 15. Cave no. 7 is dated to earlier than 5th Century and the remaining caves are later than the fifth century. The artistically carved chaityas are located in cave no.19 and 26. One can find images of Buddha and Bodhisattva here. 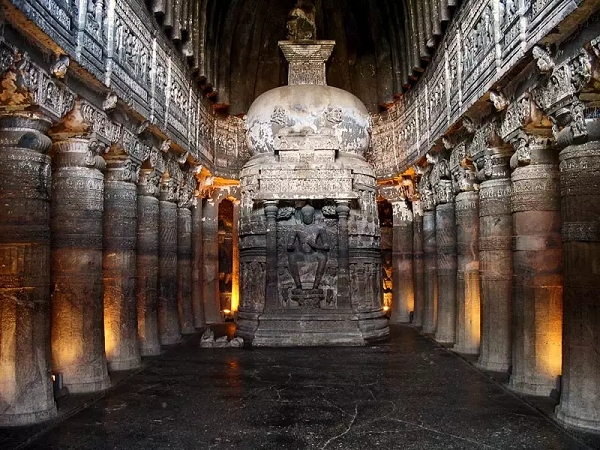 Cave no. 26 houses the famous image of the Mahaparinibana of Buddha. The images in Ajanta are known for their grandeur. Varahadeva, Upendragupta, and Mathuradasa are some of the patrons of Ajanta Caves. These caves are basaltic rocks found in the Deccan belt. The similar patterns of rock-cut architecture are also observed in Ellora, Elephanta, Badami and Bagh Caves.

Ajanta is a unique cave site as it has paintings surviving dated back to the 1st century BCE. One can observe typological variations in the paintings here. There are lines that are clearly defined and rhythmic. Caves no.9 and 10 have some early phase paintings as well. The second phase of paintings in these caves can be analyzed from the images of the Buddhas. The themes of these paintings include stories from the life of Buddha and the Jatakas. 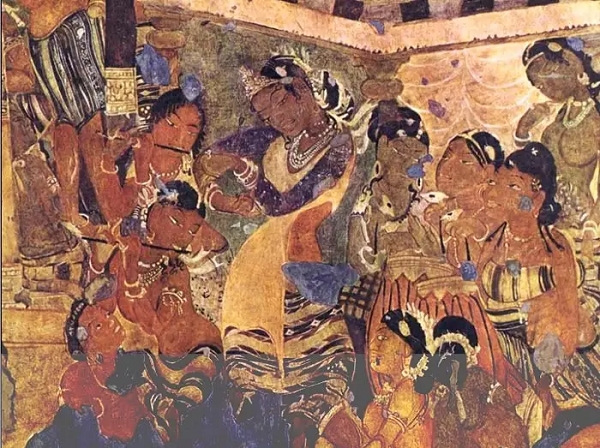 There are some paintings that occupy full wall of the caves such as Mahajanaka Jataka, Simhala Avadana, and Vidhurpandita Jataka. The Varjrapani (with Thunderbolt) and Padmapani (with Lotus) are renowned paintings located in Cave no.1. A very interesting observation can be made with regards to the variety of skin colors including brown, yellow, yellowish brown which highlight different races that existed within the population.