What is the significance of Charminar in Hyderabad?

Charminar is a monument which was constructed in 1591, in Hyderabad, India. The literal translation of Charminar in English is 4 pillars. It is located on the east bank of the Musi River and is listed among the most recognized structures of India. There are many theories regarding the reason for the construction of Charminar but the commonly accepted theory is that it was built to celebrate the elimination of the Plague, which was widespread at that time.

Charminar was built by Muhammad Quli Qutb Shah, the fifth ruler of the Qutb Shahi dynasty. After shifting his capital from Golkonda to Hyderabad in 1591, he constructed this monument. Charminar is located at the center of the Old City. It is 426 years old !! Each minaret is installed with a spherical dome with a double balcony. The whole monument is made up of mortar, granite, limestone and pulverized marble. A clock was added to the four sides later in 1889. People believe that there is an underground tunnel connecting the Golconda fort to Charminar, which acted as an escape route for the king and his family in case of enemy attacks.

It has a mosque on the open roof near the west side and furnished as a court during the Shahi dynasty. The Charminar has a vault with two galleries, one over another. There are 45 covered prayer locations in the main gallery with a large space in front to accommodate more people for Friday prayers. 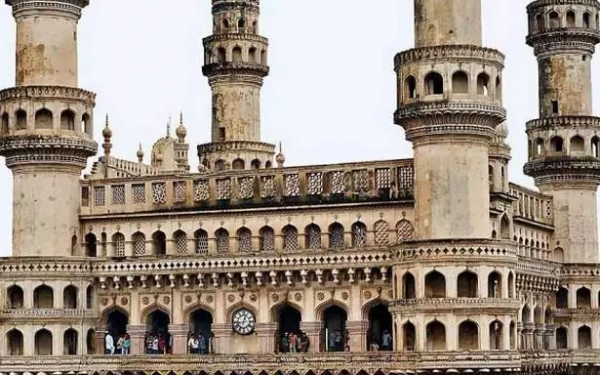 Charminar is the pride of Hyderabad. The Charminar lies at the center of the city for a good reason. The city was later planned on a grid pattern, around the Charminar, with two main roads that connect the markets of Golkonda with the port city of Machilipatnam intersecting and running North-south and east-west. It is the first multi-storied building in Hyderabad. 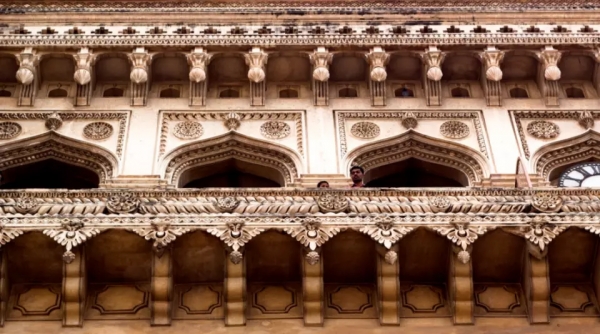 It also has religious significance and multiple faiths coexist here peacefully. Mecca Masjid and Bagyalakshmi temple lie within the proximity of Charminar which shows the religious harmony of the city. Though it is the personification of Shahi architecture, there are elements of Hindu architecture noticeable on this monument.

In the arches and domes, Islamic architecture is explicit and the ornamentation is primarily Hindu style. Constructed using granite and lime-mortar, the floral designs and water screens enhance the monument's beauty and elegance. It also offers an excellent view of the Golconda Fort which reiterates the glorious times of Hyderabad when it was under the reign of Qutb Shahi and the Golconda rulers.