What is Design of Control Unit in Computer Architecture?

A control unit drives the corresponding processing hardware by generating a set of signals that are in sync with the master clock. The two major operations performed by the control unit are instruction interpretation and instruction sequencing.

The main function of a control unit is to fetch the data from the main memory, determine the devices and the operations involved with it, and produce control signals to execute the operations.

There are two types of control organization that are as follows −

The control memory is programmed to start the needed sequence of micro-operations. A hardwired control requires changes in the wiring among the various elements if the design has to be modified or changed.

The block diagram of the control unit is displayed in the figure. It includes two decoders, a sequence counter, and several control logic gates. 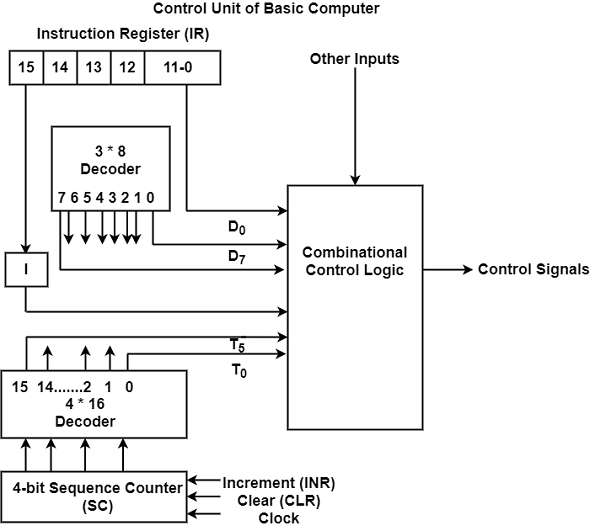 Some instruction that is read from the memory is placed in the Instruction Register (IR). Therefore, the IR is divided into three elements such as I bit, opcode, and bits from 0 through 11. The opcodes are decoded with a 3 * 8 decoder whose outputs are indicated by symbols D0 through D7.

The binary value of the respective opcode is the subscripted number in the symbol. The symbol I which is the 15th bit of the instruction is transferred to a flip flop. The control logic gates have the bits that are used from 0 through 11.

The sequence counter is 4-bit counts in binary from 0 through 15. It can be incremented or cleared synchronously. The timing signals from T0 through T15 are the decoded outputs of the decoder.

The figure displays the general configuration of a microprogrammed control organization.