What is Pipelining in Computer Architecture?

Pipelining defines the temporal overlapping of processing. Pipelines are emptiness greater than assembly lines in computing that can be used either for instruction processing or, in a more general method, for executing any complex operations. It can be used efficiently only for a sequence of the same task, much similar to assembly lines.

A basic pipeline processes a sequence of tasks, including instructions, as per the following principle of operation −

Each task is subdivided into multiple successive subtasks as shown in the figure. For instance, the execution of register-register instructions can be broken down into instruction fetch, decode, execute, and writeback. 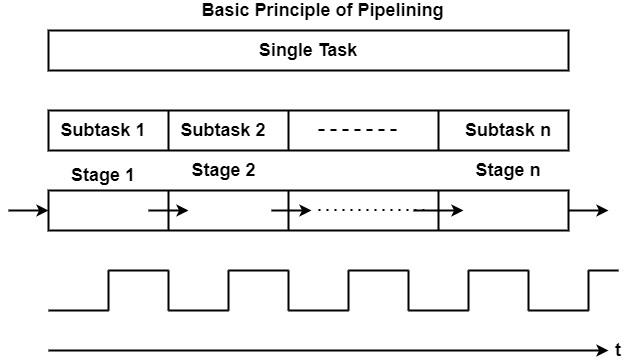 A pipeline phase related to each subtask executes the needed operations.

A similar amount of time is accessible in each stage for implementing the needed subtask.

All pipeline stages work just as an assembly line that is, receiving their input generally from the previous stage and transferring their output to the next stage.

Finally, it can consider the basic pipeline operates clocked, in other words synchronously. This defines that each stage gets a new input at the beginning of the clock cycle, each stage has a single clock cycle available for implementing the needed operations, and each stage produces the result to the next stage by the starting of the subsequent clock cycle.