Observation is a popular method of data collection in behavioral sciences. The power, observation has been summed by W.L. Prosser as follows

"there is still no man that would not accept dog tracks in the mud against the sworn testimony of a hundred eye witnesses that no dog had passed by."

Observation refers to the monitoring and recording of behavioral and non behavioral activities and conditions in a systematic manner to obtain information about the phenomena of interest, 'Behavioral Observation' is:

The non behavioral observation is an analysis of records e.g. newspaper archives, physical condition analysis such as checking the quality of grains in gunny bags and process analysis which includes observing any process. Observation can be classified into various, categories. 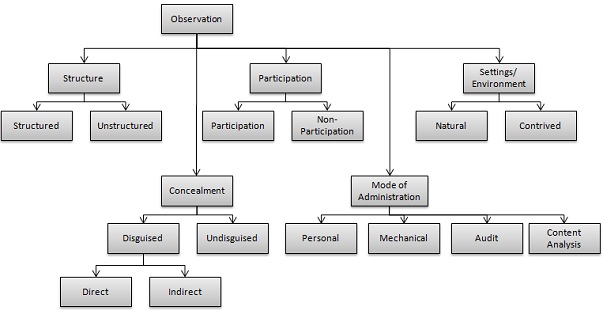 While conducting an observation study, care should be taken that it is free from errors and bias: The following basic steps can be followed.