The data required for a research can be primary or secondary in nature. Primary data, by definition is the date that has been collected first hand by the researcher specially for addressing the population at hand. A survey research can be objectivist or subjectivist in nature. An objectivist approach is a more rigid and scientific approach. In this the hypothesis is tested using publicly standard procedure. There is little or no latitude available to deviate from the stated procedures or questions. A subjectivist approach, requires a hypothesis test, but is not that rigid in following the procedures. The researcher is allowed to use unstructured methods, at his discretion, to record data. The research data can be classified as follows: 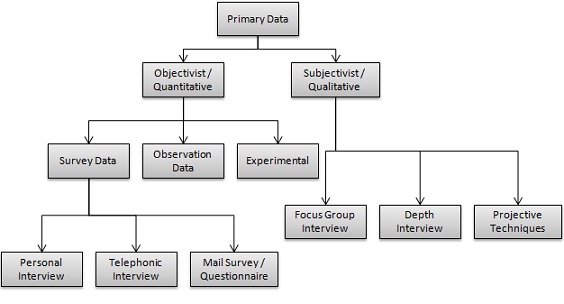 A form of communication approach to collecting data from respondent's interview is to oral or verbal questioning. Bingham and Moore have described interview as 'conversation with a purpose.' Lindsey Gardner, has defined interview as a 'two-person conversation, initiated by the interviewer for the specific purpose of obtaining research-relevant information and focused by him on the content specified by the research objectives of description and explanation.

It is thus clear that interview is a verbal conversation between two people with the objective of collecting research relevant information from the respondent. Interview can be classified into various types' viz., personal interview, telephone interview, focus group interview, depth interview and projective techniques also called as indirect interviewing.

The interview techniques can be grouped in the following categories:

Method of Conducting an Interview

A personal interview involves a lot of preparation. Generally an interview should go through the following stages.

In telephone interviewing the information is collected from the respondent by asking the questions on phone. The marriage of telephone and computer has made this method even more popular. Traditional telephone interviews call for phoning a sample of respondents, asking them questions written on a paper and recording them with a pencil. In case of Computer Assisted Telephone Interviewing (CATI) uses a computerized questionnaire is used which prompts the interviewer with introductory statements, and qualifying questions to be asked to the respondents.

The computer replaces the paper and pen. The computer randomly dials a number from the sample; upon contact the interviewer reads the questions and diret1y into the computer's memory bank. Another variant is 'Computer Administered Telephone Surveys (CATS) where the interviewer is replaced by computer. The questions are voice synthesized and the respondent's answer and computer timing decide whether to continue or disconnect. The chief disadvantage of this method is that the rejection of this mode of data collection affects the refusal rate (and thus non-response bias) because people hang up more easily on a computer than on a human Telephone interview has the following advantages over personal interview:

A kind of unstructured interview. It involves a moderator leading discussion between small groups of respondents on a specified topic. A focus group interview involves 8 to 12 respondents having homogeneous characteristics, seated in a comfortable relaxed informal atmosphere. The interview generally continues for 1 to 3 hour during which the respondents develop a rapport and share their views. The proceedings are recorded on an audio or visual device. The moderator keeps the discussion going and probes the respondents whenever necessary to elicit insightful responses. These responses are better analyzed to derive conclusive results. Focus group interview results in advantages summed up as following 10 "S"

However, like the two sides of a coin, focus group interview suffers from certain disadvantages like; the results can be wrongly interpreted since the response is not to any specific question. Focus group interviews make coding and analysis of data also very difficult. Most importantly, it is difficult to find a moderator who can conduct these interviews successfully.

In depth interviews, the interviewer asks the initial question and thereafter it is the response of the respondents from which further questions may be generated. The interviewer using probing techniques looks for more elaboration.

The interviewer only follows a rough outline of questions. The depth interviews have the advantage of uncovering much uncovering much deeper feelings and insights than focus group interviews, since they are dealing with just one respondent. However it suffers from the drawback of being expensive, time consuming and demands skilled interviewer.

In projective techniques, the respondents are asked to interpret the behavior of others and this way they indirectly reveal their own behavior in the same situation. Some of these techniques are discussed below.