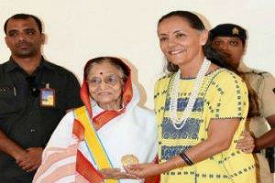 Former Indian President Pratibha Patil has been conferred the "Orden Mexicana del Aguila Azteca" (Order of the Aztec Eagle), the highest civilian award of Mexico given to foreigners, on 1 June 2019.

The Ambassador of Mexico to India, Melba Pria, conferred the award on Patil, who created history as this country's first woman President (2007-2012), at a special ceremony held in the MCCIA Bhavan, Pune.

Mexico's highest distinction for foreigners is in recognition of their outstanding services to the Mexican nation or humanity, significant contributions to strengthening the bilateral relations between Mexico and other countries.

Ms. Patil, 85, becomes only the second Indian head of state to get the award. Earlier, the late President S. Radhakrishna had been conferred this honour.

Order of the Aztec Eagle Award

The royal eagle is Mexico's national animal, sacred to the ancient Aztecs and it is present on the National Emblem of the Mexican flag. It is an essential symbol that links their Aztec past with the modern nation.

It is of gold and turquoise and is given to express the respect and admiration of the Mexican people.

The award was created by a decree in 1993 by the then President of Mexico, Abelardo L. Rodriguez, it is awarded to prominent heads of state or government, ambassadors after they have served in Mexico, important personalities who have made a major contribution in various fields, service to the country or its people. 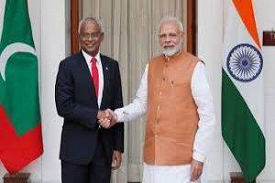 The main aim of the visit is to further cement ties with the Indian Ocean archipelago.

Earlier, Prime Minister Modi and President Solih held delegation-level talks as the two countries signed a slew of agreements to strengthen bilateral ties in a number of key areas including defence.

His last was in November 2018 to attend President Solih's swearing-in, this visit is the first by an Indian prime minister at a bilateral level in eight years.

Relation between India and Maldives

The relations between India and the Maldives after the sworn in of President Abdulla Yameen.

The Imposition of restrictions on work visas for Indians and signing of a new Free Trade Agreement with Beijing also did not go down well with New Delhi.

The Maldives is a key to its Maritime Silk Road project in the Indian Ocean acquired Hambantota port in Sri Lanka and Djibouti in the Horn of Africa.

Indian Government offered the Maldives a line of credit 800 million us dollars and three important projects have already been identified and the project report preparation is underway.

Water supply and sewerage for 36 of the Islands are implemented.

Another one is Addu Urban Development Centre

The third project is the SME Development Financing project. 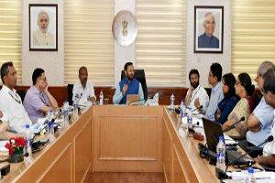 The Ministry of Information and Broadcasting (I&B) has instituted its first Antarashtriya Yoga Diwas Media Samman (AYDMS). It was announced by the Minister Prakash Javadekar. The aim of the award is to acknowledge the positive role & responsibility of media in disseminating the outreach of Yoga in India and abroad. The award will be conferred to Media Houses engaged in Print Media, Electronic and (Television & Radio).

Prize: The award comprises of a special medal/plaque/trophy and a citation.

Six juries will assess the contribution of Media in the popularising of Yoga. The duration of the coverage for AYDMS would be from 10th June to 25th June 2019.

Announcement of the honors will be announced and Antarashtriya Yoga Diwas Media Samman (AYDMS) ceremony in July 2019 (tentative date).

The award would be given under the following categories −

In 2019, the year the award was instituted, thirty-three awards have been conferred under the 3 categories.

United Nations has universally acknowledged Yoga under the leadership of Prime Minister Narendra Modi. Yoga is being practiced globally around 200 countries on 21 June every year.

Yoga is a group of physical, mental, and spiritual practices or disciplines which originated in ancient India. Yoga is one of the six orthodox schools of Hindu philosophical traditions. 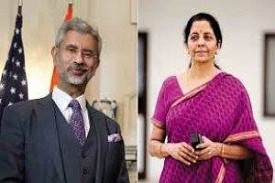 The function is to be held in the month of August.

Union Finance Minister Nirmala Sitharaman studied in the School of Social Sciences and the School of International Studies of the university for her MA and M Phil degrees respectively.

Minister of External Affairs Dr S Jaishankar studied in the School of International Studies where he completed his M Phil and Doctoral research with the specialisation in nuclear diplomacy.

She is a member of the Rajya Sabha, the upper house of the Indian Parliament.

5 - Priyanka Chopra to be honoured with humanitarian award by UNICEF 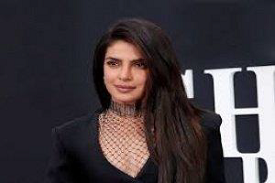 Indian actress Priyanka Chopra with the Danny Kaye Humanitarian Award at the United Nations Children's Fund (UNICEF)Snowflake Ball in the month of December.

The event will be held on December 3 in New York.

She is a UNICEF Goodwill Ambassador.

She is known for her contribution to social causes

She will raise her voice for children’s education.

She is also to improve the education, health and safety of girl child in India. 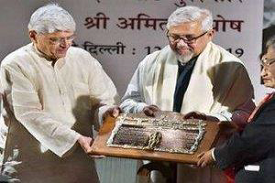 Author Amitav Ghosh was conferred the 54th Jnanpith Award. He was awarded for his contribution to the enrichment of Indian literature in English at a ceremony. The award was presented by the former governor of West Bengal Gopalkrishna Gandhi in New Delhi on 13 June. Amitav Ghosh is the first English writer to get this prestigious Jnanpith Award.

Amitav Ghosh is an Indian writer. He is best known for his work in English fiction. In 2007, the government of India awarded him the civilian honour of Padma Shri. He also received the Israeli Dan David Prize, together with Margaret Atwood.

His works and awards

His book, The Circle of Reason won the Prix Médicis étranger which is France's top literary awards.

His work 'The Calcutta Chromosome' won the Arthur C. Clarke Award for 1997.

Also, his work 'Sea of Poppies' was shortlisted for the 2008 Man Booker Prize.

The book 'River of Smoke' was shortlisted for the Man Asian Literary Prize 2011.

The Jnanpith Award is an Indian literary award. It was instituted in 1961. The award was sponsored by Bharatiya Jnanpith, a literary research organization. It is presented annually by the Bharatiya Jnanpith to an author for their outstanding contribution towards literature. The award is bestowed only on Indian writers who writes in Indian languages that are included in the Eighth Schedule to the Constitution of India and English, with no posthumous conferral.

G. Sankara Kurup was the first who received the award in 1965. The award consists of a citation plaque, a cash prize of Rs.12 lakh (around), and a bronze replica of Saraswati, the Hindu goddess of knowledge and wisdom 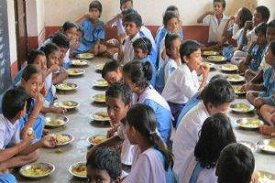 The Bengaluru-based NGO Akshaya Patra has been awarded the BBC World Service Global Champion Award for the programme. The award is presented at the BBC Food and Farming Awards in Bristol, London. The award recognises a project or person who is changing the way the world produces, processes, consumes or thinks about food for the better.

Akshaya Patra was selected by an international panel of judges from nominations sent in by the World Service audience around the world. Other projects on the shortlist included UK charity WRAP, and Food 4 Education.

Akshaya Patra is a non-profit organisation which was established on 2000. The organisation runs one of the world’s largest school meals project in India.

The mission aims to ensure that no child is deprived of education because of hunger. It recognises that children may abandon education to do menial jobs to earn enough money to eat and also an empty stomach in the classromm can make it hard for them to concentrate.

20 years ago, the charity started its mid­day meal programme. Initially it provided 1,500 free school lunches every day. Today, it feeds 1.75 million children all over India. 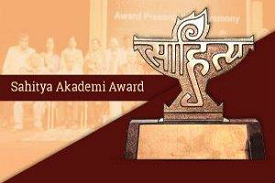 Sahitya Akademi, India's national academy of letters has announced a list of 22 winners of the Bal Sahitya Puraskar and 23 recipients of the Yuva Puraskar for the year 2019. The selection of awardees in Agartala has been approved by the Executive Board of the Akademi, under the chairmanship of its President, Chandrashekhar Kambar.

The Bal Puraskar awaard is to be conferred upon the winners on the Children's Day. The day for the Yuva Puraskar is yet to be decided.

The winners of both the awards will receive a casket containing an engraved copper plaque and a cheque of Rs 50,000. 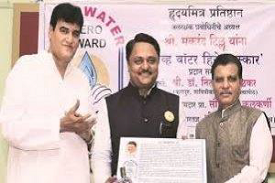 This award presented to him in order to encourage his efforts to raise awareness about water conservation in the city.

The ceremony was held in Pune, Maharashtra.

He is a Laughter Yoga trainer and motivational speaker and its campaign to save water by replacing leaking taps with new ones.

He was honored by the HridayMitra Foundation with the presence of writer and philanthropist Ramchandra Dekhane and foundation president Shrikant Mundada. He is the founder of a Non-Governmental Organisation (NGO) named Jalrakshak Prabodhini.

An organization aims to spread awareness about diseases as well as the surgeries required to remedy them. 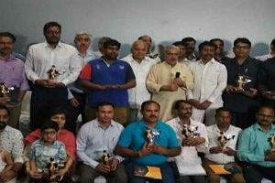 Twenty-nine journalists from print and electronic media was awarded the Matri Shree Media Awards for their contribution towards journalism. Apart from media personalities, a social activist was also presented the Bharat Mata shield at the 44th Matri Shree media award ceremony organized in New Delhi.

A former mayor of North Delhi Municipal Corporation Adesh Gupta was also felicitated for his contribution to social service. 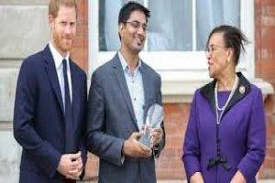 Nitesh Kumar Jangir created Saans as a breathing support device to avoid deaths of premature babies from respiratory distress syndrome due to a lack of immediate access to complex medical equipment.

He received his award in the People category alongside 14 other innovators from across the 53 member-countries of the Commonwealth.

The main aim is to ensure that babies don't lose their lives due to the lack of access to a piece of technology.

This device can be used anywhere to deliver crucial support to premature babies.

It is the world's first neonatal Continuous Positive Airway Pressure (CPAP) device which can be used in multiple ways through direct source electricity including a vehicle's electrical supply, a rechargeable battery, compressed gas, or even manual air pumping.

It is of low cost and this award for use in similar conditions in regions like Africa.

The Commonwealth Innovation Awards receive a trophy, a certificate and 2,000 pounds in prize money.

The awards are divided with five thematic categories improving the lives of People; boosting prosperity; protecting the planet, promoting peace; and building partnerships for development. 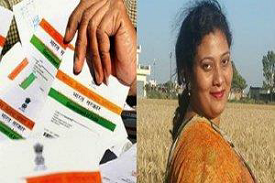 Rachna Khaira of The Tribune News Service won the Redlnk Award for Excellence in Indian Journalism Journalist of the Year 2019. She is currently working for The Huffington Post.

The award is for her expose during 2018 on functioning of the Unique Identification Authority of India (UIDAI) and its Aadhaar data cache. The investigation that was conducted by Rachna Khaira confirmed that personal data of millions of citizens were at risk of being hacked/traded for a price.

The journalists ran a series of sting operations regarding the isssue and it helped to raise serious doubts over government claims that Aadhaar data stored on UIDAI servers was safe and secure.

The Lifetime Achievement Award for 2019 was jointly awarded to two retired senior journalists, Dinu Ranadive, who retired from the Maharashtra Times, and Photojournalist Sebastian D’Souza, who served as Photo Editor of Mumbai Mirror.

The Red Ink awards are a set of annual awards which were instituted by The Mumbai Press Club in 2010. Th award recognises an individual for his/her excellence in journalistic achievements as assessed by a special jury. These award grants national recognition to journalists by a professional body.

The event was held at Reliance Corporate Park, Navi Mumbai.

Around 2.6 lakh coders fought for 87 days to claim the title this year. 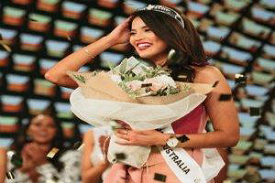 Australian-Ugandan Bella Kasimba was announced the first runner-up in the finale. She is a law graduate who currently works in Department of Jobs, Precincts and regions in Melbourne.

Priya was born in India and grew up Oman she then migrated to Australia. Prior to becoming Miss Universe Australia, Serrao worked as a policy adviser for the Government of Victoria and was to be admitted to the Supreme Court of Victoria as a lawyer later in 2019.