Gantt chart is a type of a bar chart that is used for illustrating project schedules. Gantt charts can be used in any projects that involve effort, resources, milestones and deliveries.

At present, Gantt charts have become the popular choice of project managers in every field.

Gantt charts allow project managers to track the progress of the entire project. Through Gantt charts, the project manager can keep a track of the individual tasks as well as of the overall project progression.

Gantt chart was invented by a mechanical engineer named Henry Gantt in 1910. Since the invention, Gantt chart has come a long way. By today, it takes different forms from simple paper based charts to sophisticated software packages.

As we have already discussed, Gantt charts are used for project management purposes. In order to use Gantt charts in a project, there are a few initial requirements fulfilled by the project.

First of all, the project should have a sufficiently detailed Work Breakdown Structure (WBS).

Secondly, the project should have identified its milestones and deliveries.

Gantt charts can be successfully used in projects of any scale. When using Gantt charts for large projects, there can be an increased complexity when tracking the tasks.

This problem of complexity can be successfully overcome by using computer software packages designed for offering Gantt chart functionalities.

There are dozens of Gantt chart tools that can be used for successful project tracking. These tools usually vary by the feature offered. 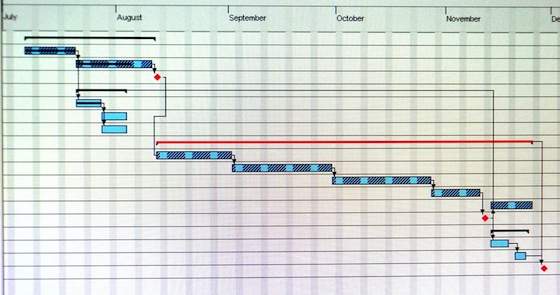 The simplest kind of Gantt chart can be created using a software tool such as Microsoft Excel. For that matter, any spreadsheet tool can be used to design a Gantt chart template.

If the project is small scale and does not involve many parallel tasks, a spreadsheet based Gantt chart can be the most effective type.

Sometimes, one may decide to create their own Gantt chart tool without buying an existing one. If this is the case, first of all, one should search the Internet for free Gantt chart templates.

This way, one may actually find the exact Gantt chart template (probably in Excel) required for the purpose. In case, if no match is found, then it is sensible to create one's own.

Excel is the most popular tool for creating custom Gantt charts. Of course, one can create a Gantt chart from scratch in Excel, but it is always advisable to use a Project Management add-on in Excel to create Gantt charts.

These project management add-ons are published by Microsoft and other third-party companies.

The ability to grasp the overall status of a project and its tasks at once is the key advantage in using a Gantt chart tool. Therefore, upper management or the sponsors of the project can make informed decisions just by looking at the Gantt chart tool.

For large projects, the information displayed in Gantt charts may not be sufficient for decision making.

Although Gantt charts accurately represent the cost, time and scope aspects of a project, it does not elaborate on the project size or size of the work elements. Therefore, the magnitude of constraints and issues can be easily misunderstood.

Identifying the level of detail required in the project schedule is the key when selecting a suitable Gantt chart tool for the project.

One should not overly complicate the project schedules by using Gantt charts to manage the simplest tasks.