What is Crisis Management?

In any organization or business, it is always essential that you are prepared for any problems that may arise when it is least expected.

It is in the way that you deal with these issues that the success of your business will be based on. It is a well known fact that the biggest blow to an organization comes from the major unpredictable disasters that occur often leaving everyone, from the management to the public, involved in a state of confusion.

No organization however big or famous is immune from various crises. This may include situations such as your computer systems failing or even worse, infrastructure being completely destroyed.

Crisis management has entered the field of management only very recently but has since contributed a great deal to the prevention of major management disasters.

What crisis management typically requires is that you carry out forecasting of certain crises that you think could occur in the near future, putting your organization into jeopardy.

You then also come up with a solution as to how you would go about dealing with such a crisis. This would also require you to have a clear plan of all steps that would need to be taken should such a situation arise.

However, it may not always be the case that the organization has time to prepare for such a crisis. In such a situation, the management team would need to work on mitigating the amount of loss caused and recovering from the crisis at hand.

It is important that you have a good understanding of the different types of crises that could take place at the very outset.

This is vital as all crises cannot be handled in the same manner and would require different approaches and various techniques to be applied. Although types of crises can be categorized into several kinds, the most common categories are as follows:

No organization is free from internal politics and disagreement between the various levels of the workforce.

It is therefore essential that you always keep in mind that high-ranking workers could always resign in the middle of an important project or the workers may plan a strike or protest to express their disgruntlement with the way certain aspects of the organization are run.

Knowing how to manage employee disgruntlement is therefore key to preventing any future fights from erupting, impeding the progress of work being carried out by the organization.

Planning for an Impending Crisis

Without a clear plan as to how to deal with the crises that could occur at the very outset, you would only drag the organization into greater problems.

It is very important that someone plays the role of a leader and chooses a dynamic team in order to carry out all aspects of planning.

It is this management team that would have to not only ascertain what types of crises may occur, but then carry on to study various strategies that could be applied to minimize or even prevent altogether any damage that could be caused.

The next step would then be to try out these strategies and see if it would work.

At times such as these, your organization would benefit greatly from other organizations that would be able to provide you with invaluable resources to help you mitigate the crises to the greatest extent possible. 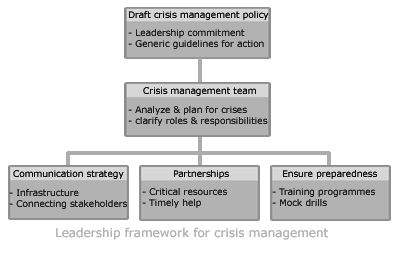 It is essential to keep in mind that when a crisis occurs you would need to have a response team ready to deal with the media and the various stakeholders.

All these parties would need information on the given situation and what is being done to deal with it. This also requires you to have a clear crisis communication plan with the target audience in mind.

Remember that each group needs to be handled in a different manner; customers may not require the same information as the employees of the organization, and so on.

The only way to successfully control a crisis from going out of your hands is to always have a good plan and a good team ready to deal with various situations that may crop up.

With these strategies in place, you would always be able to reduce the damage caused to the organization to a great extent.