When your SAP HANA system is installed on a single system, it is known as Single Host System; however, when you distribute the system installation on multiple systems, it is called Multiple Host Systems. Using multiple host systems, you can use features such as Load Balancing and Scale Out feature of SAP HANA system. You can overcome the hardware limitations by distributing the load of your system on multiple servers.

You can also assign different tables to different hosts using database partition to split a single table between hosts (partitioning of tables), and to replicate tables to multiple hosts.

When SAP HANA system is installed on multiple hosts, SAP HANA Administrator can perform start and stop, backup, or run update as a single system by taking single System ID known as SID.

Each SAP HANA system contains its own server components for each host and the request from the client application can be distributed to different hosts in multiple host systems. 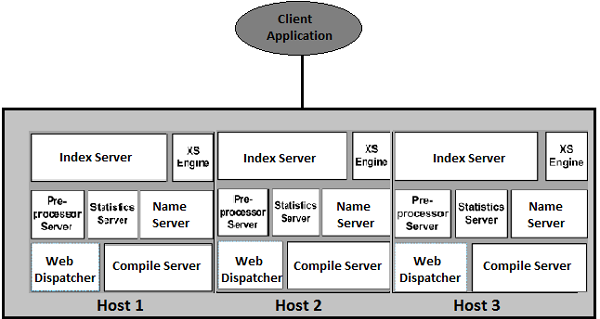 In the above screenshot, you can see SAP HANA multiple host system architecture, where HANA system has 3 separate instances, and each instance has its own server components.

The request from the client application can be distributed to any of the instance in this environment.