Following are the special purpose oscilloscopes.

Now, let us discuss about these special purpose oscilloscopes one by one.

The Oscilloscope, which displays two voltage waveforms is called Dual Beam Oscilloscope. Its block diagram is shown in below figure.

The combination of the following blocks together is called a channel.

There are two channels in Dual Beam Oscilloscope. So, we can apply the two signals, namely A & B as input of channel A & Channel B respectively. We can choose any one of these four signals as trigger input to the trigger circuit by using a switch. Those are input signals A & B, External signal (Ext) and Line input.

The Oscilloscope, which produces two traces on its screen is called Dual Trace Oscilloscope. Its block diagram is shown in below figure. 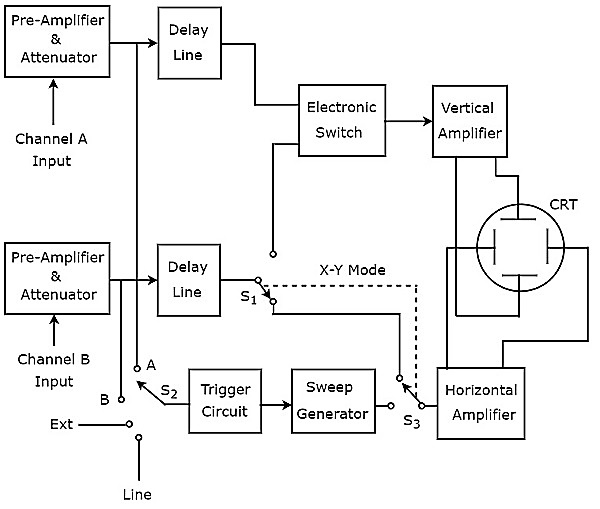 In above block diagram, the first two blocks are separately present in both channels. The last two blocks are common to both the channels. Hence, with the help of electronic switch we can connect the delay line output of a specific channel to vertical amplifier.

We can choose any one of these four signals as trigger input to the trigger circuit by using a switch. Those are input signals A & B, External signal (Ext) and Line input.

This oscilloscope uses same electron beam for deflecting the input signals A & B in vertical direction by using an electronic switch, and produces two traces. the blocks that deflect the beam horizontally is common for both the input signals. 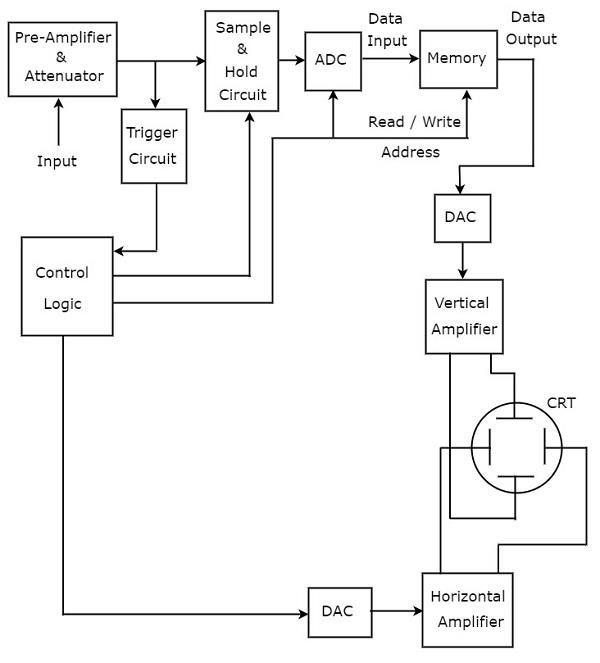 Additional blocks required for digital data storage are added to a basic oscilloscope to make it convert it into a Digital Storage Oscilloscope. The blocks that are required for storing of digital data are lies between the pre-amplifier & attenuator and vertical amplifier in Digital Storage Oscilloscope. Those are Sample and Hold circuit, Analog to Digital Converter (ADC), Memory & Digital to Analog Converter.

Control logic controls the first three blocks by sending various control signals. The blocks like control logic and Digital to Analog Converter are present between the trigger circuit and horizontal amplifier in Digital Storage Oscilloscope.

The Digital Storage Oscilloscope stores the data in digital before it displays the waveform on the screen. Whereas, the basic oscilloscope doesn’t have this feature.