Oscilloscope is an electronic equipment, which displays a voltage waveform. Among the oscilloscopes, Cathode Ray Oscilloscope (CRO) is the basic one and it displays a time varying signal or waveform.

In this chapter, let us discuss about the block diagram of CRO and measurements of some parameters by using CRO. 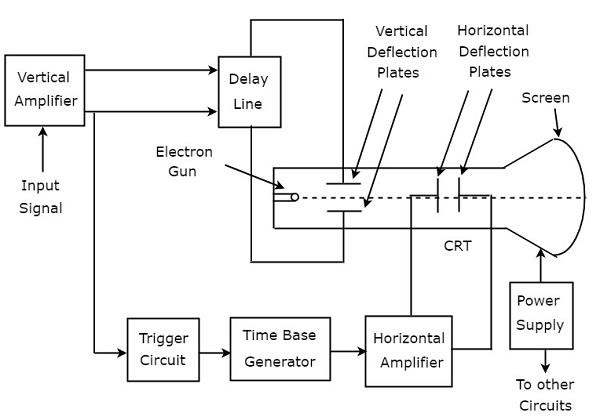 The function of each block of CRO is mentioned below.

In this way, CRO will display the applied input signal on the screen of CRT. So, we can analyse the signals in time domain by using CRO

We can do the following measurements by using CRO.

Now, let us discuss about these measurements one by one.

$A$ is the amplitude

$j$ is the value of volt/division

$n_{v}$ is the number of divisions that cover the signal in vertical direction.

CRO displays the voltage signal as a function of time on its screen. The Time period of that periodic voltage signal is constant, but we can vary the number of divisions that cover one complete cycle of voltage signal in horizontal direction by varying time/division knob on the CRO panel.

Therefore, we will get the Time period of the signal, which is present on the screen of CRO by using following formula.

$T$ is the Time period

$j$ is the value of time/division

$n_{v}$ is the number of divisions that cover one complete cycle of the periodic signal in horizontal direction.

The frequency, f of a periodic signal is the reciprocal of time period, T. Mathematically, it can be represented as

So, we can find the frequency, f of a periodic signal by following these two steps.

We will discuss about special purpose oscilloscopes in next chapter.