Current Affairs May 2016 - Places in NEWS 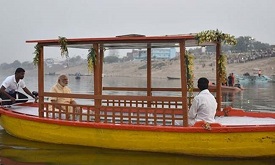 Prime Minister Narendra Modi during his Varanasi visit launched a scheme for environment-friendly solar-powered 'e-boats' at the Assi Ghat. PM Modi said in his speech that e-boats will not only reduce pollution but also help boatmen save Rs. 500 a day by not spending on diesel. The Hon’ble Prime minister distributed eleven e-boats to their owners after which he himself took a ride on one.

It is an initiative by the government to keep Ganga clean and aimed at imparting dignity to boatmen who have rendered invaluable service towards making the ancient city of Kashi famous around the world. Before addressing the gathering, PM also handed out LPG connections to 10 BPL women. 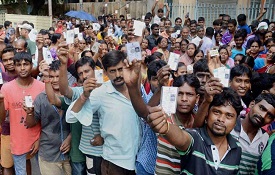 A total of 9776 people in Cooch Behar made history as they exercised their right to vote for the first time in West Bengal assembly polls' sixth and final phase. The enclaves were swapped with Bangladesh after the Land Boundary Agreement was implemented last year.

According to the agreement, 51 Bangladeshi enclaves (area of 7110 acres) situated at Indian soil in Cooch Behar District of West Bengal were united with India, while 111 Indian enclaves (area of 17160 acres) in Bangladeshi territory were integrated with that country. The 51 enclaves are spread across Dinhata, Mekliganj, Sitai, Sitalkuchi and Toofanganj Assembly constituencies. 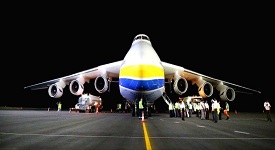 The world's largest aircraft Antonov AN-225 Mriya landed at Hyderabad's Rajiv Gandhi International airport for a 24-hr halt en-route to Australia from Turkmenistan. The aircraft will proceed to Jakarta in Indonesia and from there to Perth.

This aircraft is powered by six turbofan engines and is the longest and heaviest airplane ever built, with a maximum takeoff weight of 640 tonnes. The aircraft is 84 meters long, 18.1 meters high, has a wingspan of 88.4 meters and a fuel capacity of 300,000 kg. Its maximum speed is 850 km per hour with a 15,400 km range and 11,000 meters cruising altitude.