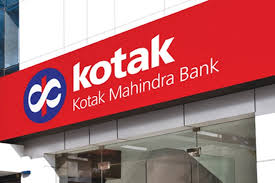 The bank offers the following products at the IBU −

News 2 - IREDA may be transformed into a Green Bank

The State-run Indian Renewable Energy Development Agency (IREDA) might be converted into a Green Bank to enable it to access funding from overseas banks and support local renewable energy projects. Large banks in India are hesitant to fund the solar and wind projects.

A green bank provides low-cost financing support to clean and low-carbon projects. India is estimated to need about USD 264 billion (EUR 230m) in financing to meet its 160-GW wind and solar goal by 2022. So far, green bonds have financed roughly USD 1.85 billion of clean energy projects in the country. 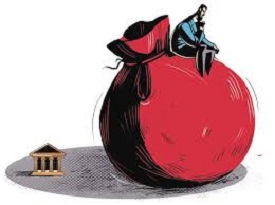 Banks have aggressively started reporting bad loans after the RBI set a target of March, 2017 to clean-up their balance sheets. Willful defaulters are those who have the ability to pay back the banks but wouldn’t do so deliberately. 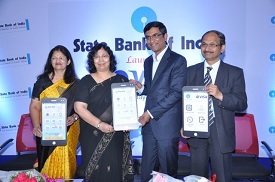 The State Bank of India (SBI) announced the launch of mVisa, a mobile-based payment solution. The service will enable customers to make payments from their smartphones, by simply scanning the unique merchant QR (Quick Response) code, at merchant outlets.

This mVisa is a card-less solution which facilitates payment by scanning the QR code displayed at the merchant outlet or from the merchants mobile. In first phase, State Bank of India’s mVisa service has been introduced in Bangalore city and the facility will be gradually expanded to other cities. ICICI Bank and Axis Bank have already introduced the mVisa application for their customers. 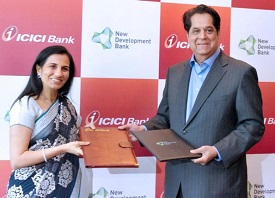 The ICICI Bank became the first financial institution in the country to have signed a Memorandum of Understanding (MoU) with the New Development Bank (NDB) promoted by BRICS Group. The MoU was signed by KV Kamath, President of NDB and ICICI Bank Head, Chanda Kochhar in Mumbai, Maharashtra.

The scope of the partnership will include the following − 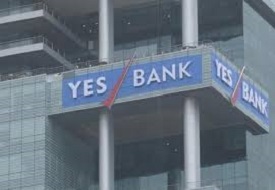 The “Custodian of Securities” is a license granted by SEBI to eligible entities allowing them to offer custodial services to financial market participants including Foreign Institutional Investors (FIIs) and Foreign Portfolio Investors (FPIs). 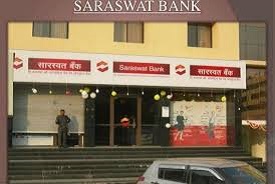 The Saraswat Bank has announced a donation of Rs. 1 crore towards drought relief in Maharashtra. It is the country's largest urban co-operative bank.

Mr. Gautam E Thakur, Vice Chairman of the bank, handed over a cheque of Rs 50,00,000 to Chief Minister of Maharashtra, Devendra Fadnavis as donation to the Chief Minister's Drought Relief Fund, Maharashtra. Similarly, Kishore Rangnekar, Director, handed over another cheque of Rs 50,00,000 to Nana Patekar of NAAM Foundation, an NGO started by actors Nana Patekar and Makarand Anaspure. 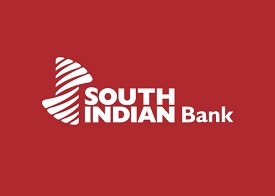 The South Indian Bank has tied-up with The National Australia Bank (NAB) for faster and hassle-free online inward remittance at the best exchange rates. The remittance fee is as low as AUD 7.

As the exchange rate is decided by the South Indian Bank, the customers will always be given the best possible rate. The customer will have the option to either convert the proceeds into INR or store it in Australian Dollars. The South Indian Bank also has tie-ups with other leading banks and exchange houses in the USA, Europe, and Asia. The Draft guidelines have been released by RBI to tap licensing of universal banks in the private sector. The Organization has invited views and comments on the draft guidelines from banks, non-banking financial institutions, industrial houses, other institutions and the public at large latest by 30th June 2016 before issue of final guidelines.

The RBI released consultation paper that aims to classify P2P as an NBFC, sets the minimum capital requirement at Rs. 2 crores, allow a platform to operate only as an intermediary and proposes that no entity other than a company can undertake this activity. P2P lending is an online platform that matches lenders with borrowers in order to provide unsecured loans.

The Organization has invited views and comments from banks, non-banking financial institutions, industrial houses, other institutions and the public at large latest by 31st May 2016 before issue of final guidelines. 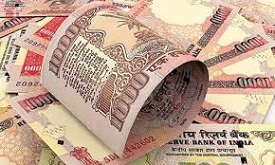 The Reserve Bank of India will shortly issue 1000 Rupee Banknotes with inset letter 'R' in both the number panels. In a release, RBI said that the banknotes will also have on the obverse, all the other security features, including ascending size of numerals, bleed lines and enlarged identification mark.

It added that the banknotes bearing signature of RBI Governor Raghuram G Rajan, will also have the year of printing '2016' printed on the reverse. It also added that all the banknotes in the denomination of 1000 rupees issued by RBI in the past, would continue to be legal tender. 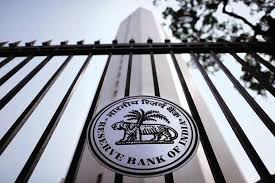 The NBFCs which have surrendered their certificates include:

The NBFCs whose certificate of registration were cancelled include: 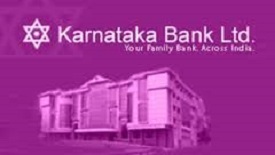 The Karnataka Bank has launched a ‘Cash Back Campaign’ on its VISA Debit Cards. The campaign will be in force for one month from 10th May 2016 to 10th June 2016, under which more than 3200 cardholders i.e., top spenders both in terms of value & volume of transactions, will get Cash Back aggregating to `10,00,000/-.

The Cardholders who have done minimum 5 POS (swiping) /Online transactions with a min value of Rs. 200/- each will qualify.

The ICICI Bank Ltd. announced the launch of the country’s first contactless business credit card in association with Jet Airways, India’s premier international airline, for small and mid-sized enterprises (SMEs) and their employees. Christened ‘Jet Airways ICICI Bank Business Advantage Card’, this co-branded credit card helps customers to save on their business expenses. It also provides customers opportunities to earn JPMiles on both spends as well as repayments on a list of business expense categories including travel, dining, office stationary, online advertising and vendor payments among others.

This card is powered by the ‘VISA payWave’ contactless technology that enables the cardholder to make payments by simply tapping the card at contactless enabled terminals in more than 48 countries including India. 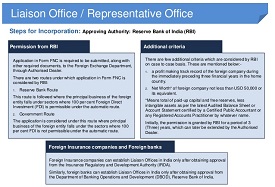 The RBI has issued norms for establishment of Branch Office (BO)/ Liaison Office (LO)/ Project Office (PO) in India by foreign entities. An application from a person resident outside India for opening of a BO/LO/PO in India shall require prior approval of Reserve Bank of India in the following cases − 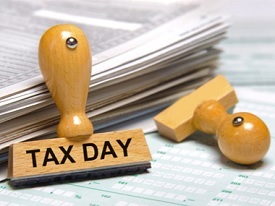 The Reserve Bank of India has appealed to the income tax assesses to remit their income tax dues sufficiently in advance of the due date. It has also stated that assesses can use alternate channels like select branches of agency banks or the facility of online payment of taxes offered by these banks. 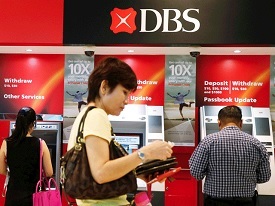 Singapore-based DBS Bank is planning to set up its biggest technology hub outside its headquarters in Hyderabad and to have over 1500 headcounts. Mohit Kapoor has been appointed as the head of its Technology Development Centre in Hyderabad. Prior to joining DBS, he was the global delivery leader and Chief Technology Officer at Bank of America – Continuum, based in Hyderabad.

As per the bank, the hub will help in strengthening the lenders technological capabilities across Asia as well as its digital banking strategy.

News 18 - RBS to shut down operations in India

The Royal Bank of Scotland (RBS), Britain’s largest state-owned bank, has decided to shut down its banking operations in the country. The bank will however be retaining the back office.

RBS will wind up its corporate, retail and institutional operations in India and shut its 10 retail branches as part of RBS’s global plan to reduce its international operations to 13 countries from the current 38. Earlier this year, the lender moved 60 back-office roles from the UK to India. 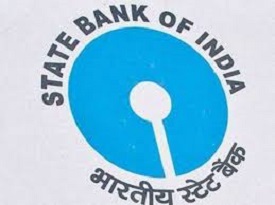 The State Bank of India has proposed the merger of its five associate banks and newly created Bharatiya Mahila Bank (BMB) with itself to emerge as a financial giant, with assets worth Rs. 37 lakh crore ($550 billion). The current balance sheet of the bank is worth Rs. 28 lac crore. It has sought the government's approval for the same. 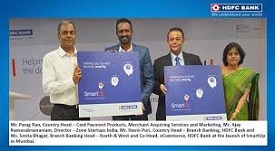 HDFC Bank launched SmartUp, a first-of-its-kind dedicated solution for start-ups, to fulfill all their banking needs. SmartUp was launched in association with Zone Startups India, a start-up accelerator in Mumbai. SmartUp is tailored to meet all the requirements of a start-up, offering banking and payment solutions, along with advisory and forex services.

The benefits also include recommendation of a Chartered Accountant for Tax, Regulatory and Compliance issues. 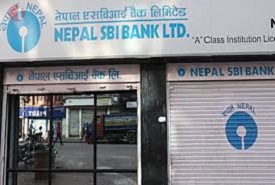 The largest overseas subsidiaries of SBI, Nepal SBI, has launched a payment gateway to facilitate online trade and non-trade transactions between Nepal and India. The bank has 59 branches and 3 Regional Offices in the Himalayan nation.

The Payment Gateway was inaugurated by SBI Managing Director B Sriram, and the Indian Ambassador to Nepal, Ranjit Rae. The bank also launched the mobile banking during the event. Henceforth, a customer can utilize various features of mobile banking and other value added services along with the platform of the payment gateway. 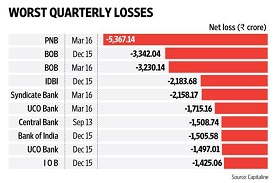 The Punjab National Bank reported a net loss of Rs. 5,367.14 crores for the fourth quarter that ended in March 2016 against a net profit of Rs. 306 crores in the same quarter a year ago, the largest-ever loss reported by an Indian lender. Gross non-performing assets (NPAs) rose to 12.90 percent at the end of March, from 6.55 percent a year ago. The net NPAs too jumped to 8.61 percent as against 4.06 percent.

India's banks are being forced to clean up their books under an asset quality review (AQR) initiated by the Reserve Bank of India (RBI). Other banks like UCO Bank, Central Bank of India, Allahabad Bank and Dena Bank have also reported steep losses in the just-concluded fourth quarter of FY16. 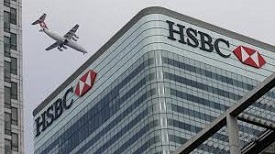 The HSBC Holdings Plc plans to close 24 branches in India, a decision that will impact around 10 percent of the company's retail customer base and lead to 300 jobs losses. HSBC's decision to downsize its India operations comes after a strategic review of its retail banking and wealth management business, which showed customers are increasingly opting for digital banking services.

HSBC said it would consolidate from 50 branches across 29 cities to 26 branches across 14 cities, and the closures will take place gradually over the next few months. With HSBC taking the lead, its major competitors, including Singapore’s DBS Group Holdings Ltd., is also following the digital strategy in India with a mobile banking initiative. The Royal Bank of Scotland (RBS) also announced plans of closing 10 branches in India. The payment bank of India Post will start functioning from March 2017 to serve as a wider platform to implement Financial Inclusion program. The Postal department has a network of 1,54,939 post offices in the country.

In August 2015, the RBI had given in-principle nod to 11 entities to start payment banks, including the postal department. The postal department has opened 85.28 lakh accounts with deposit money of Rs. 4500 crores under the Sukanya Samridhi Yojana during 2015-16 and over 4 lakh policies of Atal Pension Yojana, Prime Minister Jivan Jyoti Bima Yojana and PM Suraksha Beema Yojana. The Cabinet Committee on Economic Affairs granted ex-post facto approval to the proposal of M/s Yes Bank Ltd. for increase in the foreign investment limit to 74% from the existing foreign equity of 41.87% without any sub-limits.

The mode of instruments includes Qualified Institutions Placement (QIP) of equity shares and/or issue of ADRs/GDRs and/or QFIs/FPIs under the Portfolio Investment Scheme (PIS) by acquisition of permissible securities on stock exchange (except NRIs). This will result in a Foreign Direct Investment of US $ 1 billion (Rs. 6885 crores approx.) in the country. 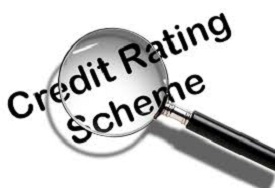 The Government has approved the revision in guidelines of the Performance in Credit Rating Scheme, aiming to increase its credibility and effectiveness for both borrowers and banks. Under the revised guidelines, the fee to be paid to the rating agencies shall be based on the turnover of the micro and small enterprises which has been classified into three slabs.