The art and science of concealing the messages to introduce secrecy in information security is recognized as cryptography.

The art of cryptography is considered to be born along with the art of writing. As civilizations evolved, human beings got organized in tribes, groups, and kingdoms. This led to the emergence of ideas such as power, battles, supremacy, and politics. These ideas further fueled the natural need of people to communicate secretly with selective recipient which in turn ensured the continuous evolution of cryptography as well.

The roots of cryptography are found in Roman and Egyptian civilizations.

The first known evidence of cryptography can be traced to the use of ‘hieroglyph’. Some 4000 years ago, the Egyptians used to communicate by messages written in hieroglyph. This code was the secret known only to the scribes who used to transmit messages on behalf of the kings. One such hieroglyph is shown below.

Later, the scholars moved on to using simple mono-alphabetic substitution ciphers during 500 to 600 BC. This involved replacing alphabets of message with other alphabets with some secret rule. This rule became a key to retrieve the message back from the garbled message.

The earlier Roman method of cryptography, popularly known as the Caesar Shift Cipher, relies on shifting the letters of a message by an agreed number (three was a common choice), the recipient of this message would then shift the letters back by the same number and obtain the original message. 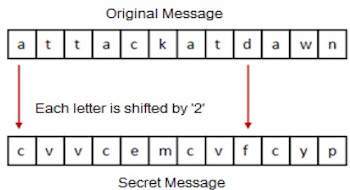 Steganography is similar but adds another dimension to Cryptography. In this method, people not only want to protect the secrecy of an information by concealing it, but they also want to make sure any unauthorized person gets no evidence that the information even exists. For example, invisible watermarking.

In steganography, an unintended recipient or an intruder is unaware of the fact that observed data contains hidden information. In cryptography, an intruder is normally aware that data is being communicated, because they can see the coded/scrambled message. 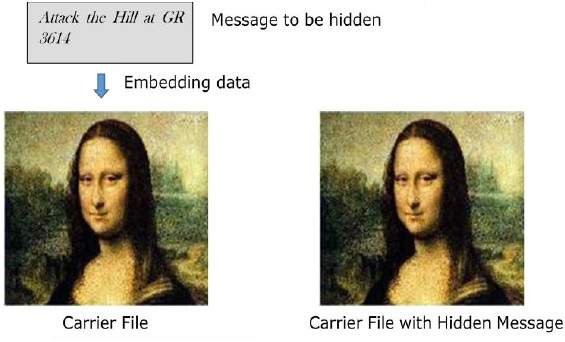 It is during and after the European Renaissance, various Italian and Papal states led the rapid proliferation of cryptographic techniques. Various analysis and attack techniques were researched in this era to break the secret codes.

With the advances taking place in this field, government organizations, military units, and some corporate houses started adopting the applications of cryptography. They used cryptography to guard their secrets from others. Now, the arrival of computers and the Internet has brought effective cryptography within the reach of common people.