Swing API is a set of extensible GUI Components to ease the developer's life to create JAVA based Front End/GUI Applications. It is build on top of AWT API and acts as a replacement of AWT API, since it has almost every control corresponding to AWT controls. Swing component follows a Model-View-Controller architecture to fulfill the following criterias.

This section guides you on how to download and set up Java on your machine. Please use the following steps to set up the environment.

Java SE is freely available from the link Download Java. Hence, you can download a version based on your operating system.

Setting Up the Path for Windows 2000/XP

Step 1 − Right-click on 'My Computer' and select 'Properties'.

Step 2 − Click the 'Environment variables' button under the 'Advanced' tab.

Setting Up the Path for Windows 95/98/ME

Step 1 − Edit the 'C:\autoexec.bat' file and add the following line at the end: 'SET PATH=%PATH%;C:\Program Files\java\jdk\bin'.

Setting Up the Path for Linux, UNIX, Solaris, FreeBSD

Environment variable PATH should be set to point to where the Java binaries have been installed. Refer to your Shell documentation if you have trouble doing this.

Example, if you use bash as your shell, then you would add the following line to the end '.bashrc: export PATH=/path/to/java:$PATH'.

To write your Java programs, you will need a text editor. There are even more sophisticated IDE available in the market. But for now, you can consider one of the following − 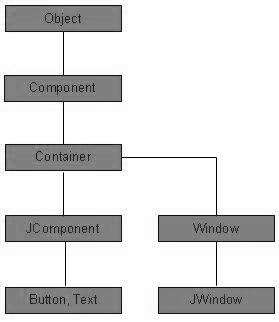 Following is the list of commonly used controls while designing GUI using SWING.

In this chapter, you will learn about Events, its types, and also learn how to handle an event. Example is provided at the end of the chapter for better understanding.

What is an Event?

Change in the state of an object is known as Event, i.e., event describes the change in the state of the source. Events are generated as a result of user interaction with the graphical user interface components. For example, clicking on a button, moving the mouse, entering a character through keyboard, selecting an item from the list, and scrolling the page are the activities that causes an event to occur.

The events can be broadly classified into two categories −

What is Event Handling?

The Delegation Event Model has the following key participants.

The benefit of this approach is that the user interface logic is completely separated from the logic that generates the event. The user interface element is able to delegate the processing of an event to a separate piece of code.

Step 1 − The user clicks the button and the event is generated.

Step 2 − The object of concerned event class is created automatically and information about the source and the event get populated within the same object.

Step 3 − Event object is forwarded to the method of the registered listener class.

Step 4 − The method is gets executed and returns.

Points to Remember About the Listener

If a component wants some listener to listen ot its events, the source must register itself to the listener.

Compile the program using the command prompt. Go to D:/ > SWING and type the following command.

If no error occurs, it means the compilation is successful. Run the program using the following command.

Event classes represent the event. Java provides various Event classes, however, only those which are more frequently used will be discussed.

It is the root class from which all event state objects shall be derived. All Events are constructed with a reference to the object, the source, that is logically deemed to be the object upon which the Event in question initially occurred upon. This class is defined in java.util package.

Following is the declaration for java.util.EventObject class −

Following are the fields for java.util.EventObject class −

protected Object source − The object on which the Event initially occurred.

This class inherits methods from the following class −

Following is the list of commonly used Event classes.

It is a marker interface which every listener interface has to extend. This class is defined in java.util package.

Following is the declaration for java.util.EventListener interface −

Following is the list of commonly used event listeners.

Adapters are abstract classes for receiving various events. The methods in these classes are empty. These classes exist as convenience for creating listener objects.

Following is the list of commonly used adapters while listening GUI events in SWING.

Following are the interfaces defining the functionalities of Layout Managers.

Following is the list of commonly used controls while designing GUI using AWT.

As we know that every top-level window has a menu bar associated with it. This menu bar consists of various menu choices available to the end user. Further, each choice contains a list of options, which is called drop-down menus. Menu and MenuItem controls are subclass of MenuComponent class. 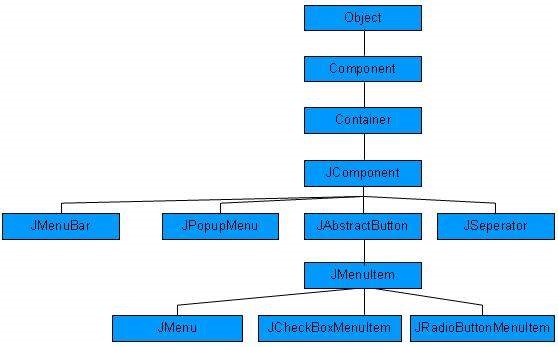 Containers are an integral part of SWING GUI components. A container provides a space where a component can be located. A Container in AWT is a component itself and it provides the capability to add a component to itself. Following are certain noticable points to be considered.

Following is the list of commonly used containers while designed GUI using SWING.