Everyone present on the Internet knows that images and videos take us closer to the real life experience than mere textual contents. Images and videos are a great way to draw attention to the content you share on Twitter and are very easy to insert into your Tweets. Let us see, how −

Note − Ensure that your Tweet has enough characters to allow for the photo you are adding. 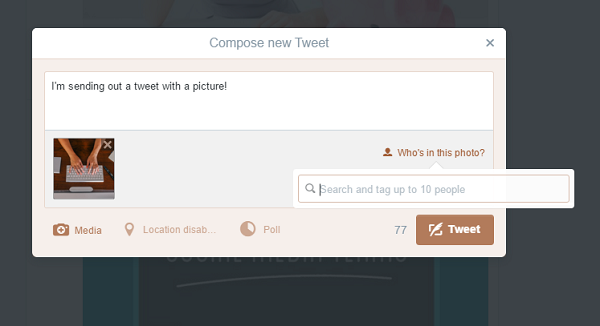 Note − Twitter accepts GIF, JPEG, and PNG files. Photos can be up to 5MB; animated GIFs can be up to 3MB. In-stream photos are shown at 440x220 pixels.

Twitter enables you to use videos to tell your story in real-life manner. By posting videos, you can connect to large audience and gradually grow it further. Twitter allots 30 seconds to capture a video as that is the best long a video should be. If it extends more than 30 seconds, it is observed that the audience loses its interest and might discontinue viewing it.

Another great way to connect with your customers is replying to a Tweet with a video. You can put a face to a brand, show how to quickly use a product or address a specific question.

Deleting or Editing the Video before Tweeting

This is how you can do it −

In timelines and across Twitter, native videos, GIFs, Periscopes (in iOS), and Vines are played automatically.

To stop the videos from auto playing in your timeline, you need to change the video’s autoplay settings. You can set different preferences for video autoplay for twitter.com on your computer and twitter app on your smartphone.

Here are some important points you should note on twitter videos −