In this chapter, we will discuss how the Time Division Switching works in Telecommunication Switching Systems and Networks.

The time division switching may be analog or digital. In analog switching, the sampled voltage levels are transmitted as they are whereas in binary switching, they are binary coded and transmitted. If the coded values are transferred during the same time interval from input to output, the technique is called Space Switching. If the values are stored and transferred to the output at a late time interval, the technique is called as Time Switching. A time division digital switch may also be designed by using a combination of space and time switching techniques.

The paths in a circuit are separated from each other, spatially in space division switching. Though initially designed for analog networks, it is being used for both analog and digital switching. A Crosspoint switch is mostly referred to as a space division switch because it moves a bit stream from one circuit or bus to another. 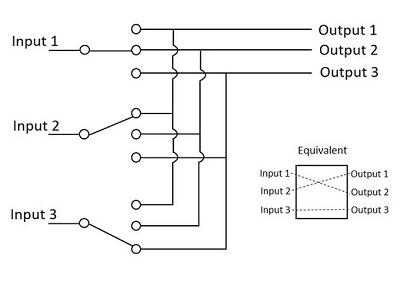 Though the space division switching was developed for the analog environment, it has been carried over to digital communication as well. This requires separate physical path for each signal connection, and uses metallic or semiconductor gates.

Following is the advantage of Space Division Switching −

The incoming and outgoing signals when received and re-transmitted in a different time slot, is called Time Division Switching. The digitized speech information is sliced into a sequence of time intervals or slots. Additional voice circuit slots, corresponding to other users are inserted into this bit stream of data. Hence, the data is sent in time frames.

Time division switches use time division multiplexing, in switching. The two popular methods of TDM are TSI (Time and Slot Interchange) and TDM bus. The data sent at the transmitter reaches the receiver in the same order, in an ordinary time division multiplexing whereas, in TSI mechanism, the data sent is changed according to the ordering of slots based on the desired connections. It consists of RAM with several memory locations such as input, output locations and control unit.

Both of the techniques are used in digital transmission. The TDM bus utilizes multiplexing to place all the signals on a common transmission path. The bus must have higher data rate than individual I/O lines. The main advantage of time division multiplexing is that, there is no need of Crosspoints. However, processing each connection creates delay as each time slot must be stored by RAM, then retrieved and then passed on.

When the transmission of data or signals is done in digital means, using the limited number of resources available, then the Time Division Multiplexing is used for the transmission of such data. Multiplexing is the process in communication, which merges two or more signals at its input into a single output, which when de-multiplexed, offers all those signals separately as they were.

The Multiplexers are broadly classified as Analog and Digital, where the Time Division Multiplexing comes under Digital Multiplexing. There are two types of TDM called as Synchronous and Asynchronous TDM. 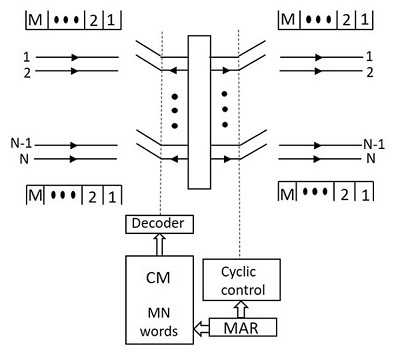 The interchange of time slots is not possible in time division switching, as the incoming time slot transfers the data to its dedicated output time slot only. Hence, time multiplexed switches do not provide full availability.

A time multiplexed Time Division Space Switch can be configured around a space array, which has M input horizontals and N output verticals. If both inputs and outputs are equal, M=N the switch leads to non-blocking. If inputs are greater than outputs; for concentrating switch we have M>N and if the outputs are higher, the switch expands gathering one more connection. In every time slot, one logic gate per vertical if M>N, or one logic per horizontal if M>N is enabled for one-to-one connections.

In every time slot, up to N or M samples are switched simultaneously. Because of the parallel transfer of N or M data samples in each time slot, a large number of channels can be multiplexed per input line. If along with multiplexing for N control memory modules, full availability has to be achieved, one should opt for time division time multiplexing technique.

The main advantage of time division time multiplexing technique is that, unlike time division space switching, it allows time slot interchange (TSI) of sample values. In TSI, a speech sample input during a time slot may be sent to the output during a different time slot, which implies a delay between reception and transmission of a sample.

A TSI which can be expanding or concentrating, has different number of time slots per frame at input and output also. For an expanding switch, the output bit rate is higher, whereas for a concentrating switch, the input bit rate is higher. The handling of input and output subscribers in this technique can be done in four ways, such as serial-in/serial-out,parallel-in/parallel-out, serial-in/parallel-out,parallel-in/serial-out.