Signaling techniques enable the circuit to function as a whole by inter connecting all varieties of switching systems. There are three forms of signaling involved in a telecommunication network.

The two main types of signaling techniques are −

In-Channel Signaling is also known as Per Trunk Signaling. This uses the same channel, which carries user voice or data to pass control signals related to that call or connection. No additional transmission facilities are needed, for In-channel signaling.

Common Channel Signaling uses a separate common channel for passing control signals for a group of trunks or information paths. This signaling does not use the speech or the data path for signaling.

We will discuss the signaling techniques in depth in our subsequent sections.

The division is as shown in the following figure − 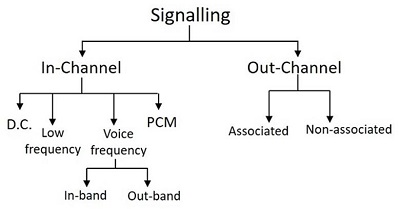 In-band voice frequency uses the same frequency band as the voice, which is 300-3400 Hz, which has to be protected against false operation by speech. One such instant took place when a lady’s voice which has generated a tone at around 2600Hz lasting for a duration of 100ms was detected as the line disconnect signal due to which her calls were frequently being disconnected in the middle of her conversation. Such problems precluded the in-band signaling during speech phase.

The advantages of In-band signaling are −

The out-band signaling uses frequencies which are above the voice band but below the upper limit of 4000 Hz of the nominal voice channel spacing. The signaling is done throughout the speech period and thus continuous supervision of the call is allowed. Extra circuits are needed to handle the extremely narrow band width of this signaling, due to which it is seldom used. Both of these in-band and out-band voice frequency signaling techniques have limited information transmission capacity. In order to provide enhanced facilities, common channel signaling is used.

Common Channel Signaling uses a separate common channel for passing control signals for a group of trunks or information paths as it does not use the speech or the data path for signaling. The common channel signaling consists of two types of nodes such as Signaling Transfer Points (STP) and Signaling Points (SP).

This common channel signaling is implemented in two modes −

In the channel-associated mode, the channel closely tracks the trunk groups along the entire length of the connection. Here, the signaling is done on a separate channel; the signaling path passes through the same set of switches, as does the speech path. 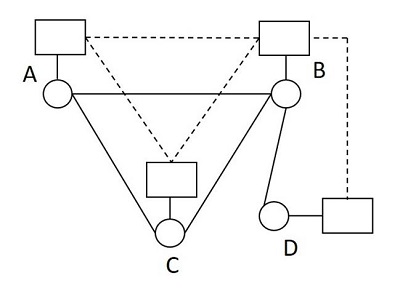 In the channel non-associated mode, there is no close or simple assignment of the control channels to trunk groups. It follows a different path from that of the speech signal as shown in the following figure. 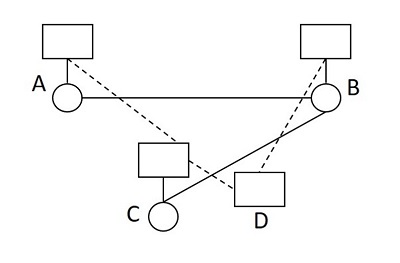 The signaling paths for the speech paths A-B and B-C are A-C-D-B and B-D-C respectively. The network topologies are different for signaling and speech networks. Though this scheme offers flexibility as there is no switching center, it is a bit complex, as the signal messages may be transferred between the two end switching systems via any available path in the common channel signaling network according to its own routing principles.

Private Branch Exchange or PBX can be understood as a local exchange within an office or a building, in order to communicate within themselves. As the name implies, it is a private exchange, which is a branch to the main exchange similar to a local loop connected to the main loop as a branch.

Private Branch Exchange is a telephone system within a local area that switches calls between those users on local lines while allowing all users to share a certain number of external phone lines. The main purpose of PBX is to save the cost of requirement for a line to each user to the central exchange office.

The following figure shows the model of a PBX. 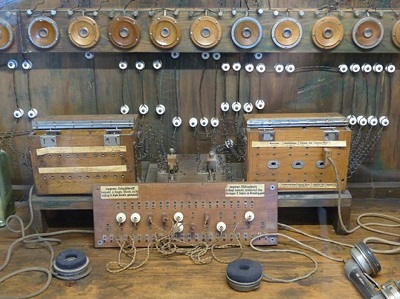 The above figure shows an early model of the PBX system. The PBX is usually operated and owned by the local office where the users are connected through it within that limited area.

The parts of a PBX include −

Having all these along with the PBX equipment, the local branch exchange is built. The PBX exchanges previously operated using the analog technology. However, these exchanges operate on digital technology. The digital signals are converted to analog for outside calls on the local loop using Plain Old Telephone Services (POTS).