In this chapter, we will discuss the switching mechanisms in Telecommunication Switching Systems and Networks.

The Uni-selector switching mechanism consists of an Electromagnet, an Armature with springs, a Pawl, a ratchet wheel with wiper attached and a detent. The wiper is made to move on the bank contacts in clock-wise direction. As the wiper moves in one-direction, the process is called Uni-selector switching. The contacts onto which the wiper moves are called Bank contacts as a number of contacts are placed in this shape of an arc.

The following figure shows the drive mechanism of the Uni-selector Strowger switching system. 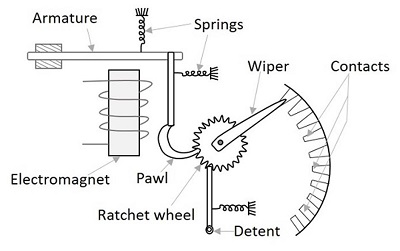 Once the electromagnet gets de-energized, the armature is released and this action moves the pawl upwards, which further moves the ratchet wheel to one position above. Hence, the wiper moves one position below or in clockwise direction, to make a contact. If the electromagnet is energized and de-energized five times, by applying five pulses, the wiper moves by five contacts. Usually three sets (or more) of wipers are placed associated with the banks of Uni-selector, one for each bank. The sets are rigidly mounted to a wiper assembly, which moves whenever the ratchet wheel rotates. The interrupter spring releases the magnet and enables it to make another step. 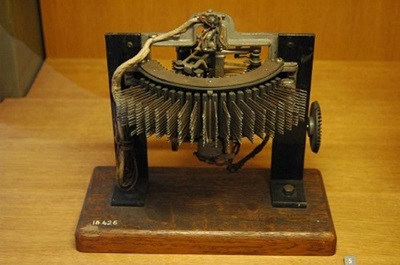 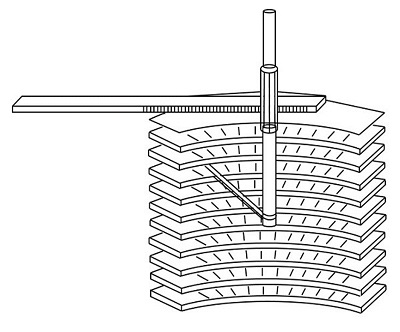 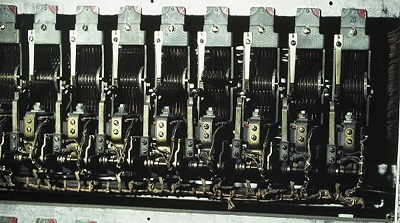 The Step-by-step switching system is a very popular and widely-used switching system, which may be constructed using Uni-selectors or two-motion selectors or the combination of both. The wiper present in this switching, steps forward by one contact and then moves forward according to the number of dialed pulses or according to the signaling conditions and hence the name, step-by-step switching is given.

A step-by-step switching is also called the Direct control system as the relevant signaling tones are sent out to the subscriber by the switching elements or selectors at the appropriate stages of switching. This system has three main stages of configuration. The following figure shows the different stages. 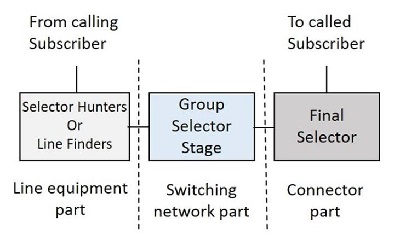 Let us now see how these blocks function.

As soon as the calling subscriber gets ready to dial the number, by lifting the handset from the telephone, a dial tone is heard. We have already learnt that a number is not accepted unless the dial tone is heard. But to get that dial tone, the line has to be established when the handset is lifted up. The Selector Hunter circuit, establishes the line to make a call as immediately as the calling subscriber lifts up the handset to make a call. 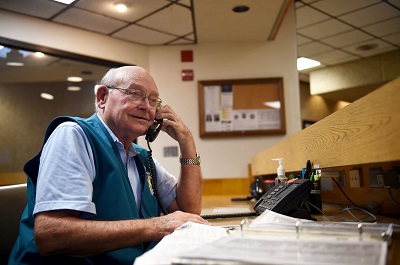 The Selector Hunters hunt for selecting a switching matrix part. Usually, 24-outlet Uni-selectors are used as selector hunters. and so this can be called as Subscriber Uni-selector scheme as there is a dedicated Uni-selector for each subscriber in the system. These can also be build using two-motion selectors. 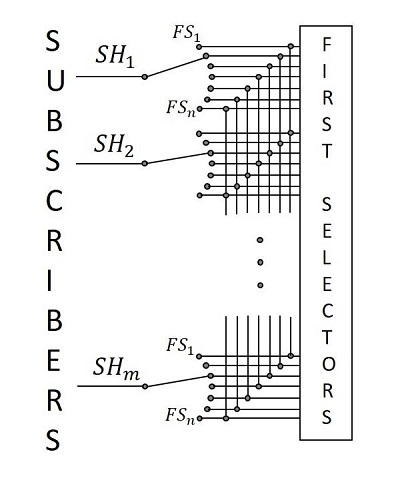 When a calling subscriber lifts the handset to make a call, the selector hunter activates the interrupter mechanism, which steps up the wiper until a free first group selector is found at the outlet. One of the bank contacts of the selector hunter, at this point, senses whether the first group selector is free or busy. Once a free first selector is sensed, the interrupter is disabled and the connection is established, where the first selector sends out a dialer tone to the calling subscriber.

The line finder approach is used where the traffic is low and the exchange is small, whereas the selector hunter mechanism described above is used for large exchanges with heavy traffic and this approach is cost-effective.

The Group Selector stage has the main switching network. The calling subscriber dials the number after hearing the dial tone. The first number when dialed activates the first selector. To be more precise, the group selector consists of certain selector stages. We used to have 5 numbers as an identification number, for the land connection. Hence, there were three selector stages present. 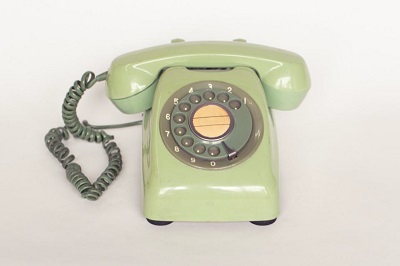 When the subscriber starts dialing, the dial tone produced till then, cuts off and the pulse train is received according to the number dialed. The wiper assembly of the first selector then moves vertically upward, according to the number dialed. The wipers then move in the horizontal plane across the contacts until they come across a contact to which a free second group selector is connected. This horizontal stepping is completed within the inter-digit gap of about 240ms. From there, the first group selector connects the electrical path to the available second group selector. 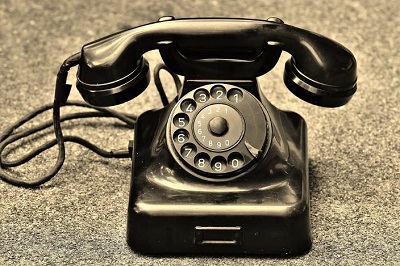 When the called subscriber lifts his handset, the ringing current and the ringing tone provided till then, are cut off and the call metering circuits are enabled by the control circuits associated with the final selectors. Otherwise, if the called subscriber is found to be busy on some other line, then the final selector sends out a busy tone to the calling subscriber. At any stage of switching, if there is no free selector available at the next stage, a busy tone is returned to the calling subscriber.

The magnets and mechanical linkages used in rotating the shafts vertically and horizontally while connecting a call, will release the magnet (generally called the release magnet) and armature release the shaft when the call is completed.