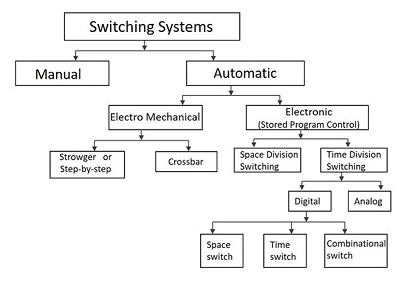 The switching systems in the early stages were operated manually. The connections were made by the operators at the telephone exchanges in order to establish a connection. To minimize the disadvantages of manual operation, automatic switching systems were introduced.

The Automatic switching systems are classified as the following −

The Crossbar switching systems have hard-wired control subsystems which use relays and latches. These subsystems have limited capability and it is virtually impossible to modify them to provide additional functionalities.

The time division switching may be analog or digital. In analog switching, the sampled voltage levels are transmitted as they are. However, in binary switching, they are binary coded and transmitted. If the coded values are transferred during the same time interval from input to output, the technique is called Space Switching. If the values are stored and transferred to the output at a time interval, the technique is called Time Switching. A time division digital switch may also be designed by using a combination of space and time switching techniques. 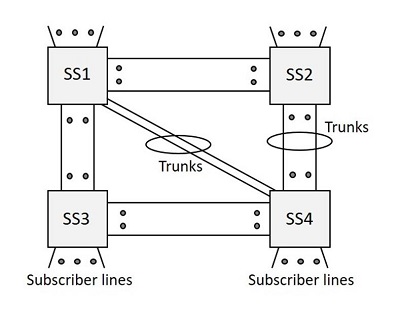 From the early to the later stages of the 20th Century (1900-80), when a person needed to make a distant call, the call was first routed to the operator at the nearest switching center and then the number and location of the called subscriber was noted down. Here, the job of the operator was to establish a call to the remote switching center and then recall the calling subscriber to establish the connection. This system of making calls was called the Trunk call system.

For example, a person at Hyderabad can book a trunk call to Mumbai and wait for the operator to call back when the operator establishes connection through the trunk lines and the switching systems.

Basics of a Switching System

In this section, we will learn about the different components and terms used in switching systems.

The set of input circuits of an exchange are called Inlets and the set of output circuits are called the Outlets. The primary function of a switching system is to establish an electrical path between a given inlet-outlet pair.

Usually, N indicates the inlets and the outlets are indicated by M. So, a switching network has N inlets and M outlets.

There are four types of connections that can be established in a telecommunication network. The connections are as follows −

In a Folded Network, the N number of inlets which come as outlets are again folded back to the inlets. Nevertheless, the switching network provides connections to the inlets and outlets as per the requirement. The following figure will help you understand how the Switching Network works. 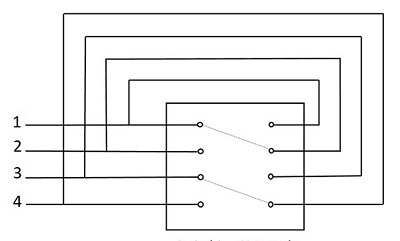 In the above figure, only 4 subscribers were considered - where line 1 is busy with line 2 and line 3 is busy with line 4. While the call is in progress, there used to be no chance for making another call and hence, only a single connection was made. Hence for N inlets, only N/2 lines are connected.

At times, it might happen that the inlet and outlet connections are continuously used to make Transit calls through trunk lines only, but not among the local subscribers. The inlet and outlet connections if used in an Inter-exchange transmission such that the exchange does not support connection between local subscribers, then it is called the Transit Exchange. A switching network of such kind is called the Non-folded network. This is shown in the following figure −

If there are no switching paths free in the network, the call requested will be denied, where the subscriber is said to be blocked and the network is called the Blocking Network. In a blocking network, the number of simultaneous switching paths is less than the maximum number of simultaneous conversations that can take place. The probability that a user may get blocked is called the Blocking Probability. A good design should ensure low blocking probability.

The product of the calling rate and the average holding time is defined as the Traffic Intensity. The continuous sixty-minute period during which the traffic intensity is high is the Busy Hour. When the traffic exceeds the limit to which the switching system is designed, a subscriber experiences blocking.

The traffic in a telecommunication network is measured by an internationally accepted unit of traffic intensity known as Erlang (E). A switching resource is said to carry one Erlang of traffic if it is continuously occupied through a given period of observation.