In this chapter, we will discuss the Crosspoint Technology in Telecommunication Switching Systems and Networks.

Challenges for the Crosspoint Technology

In our subsequent sections, we will discuss more about the related technologies

The Electromechanical Crosspoint switches which are capable of making and breaking contacts in 1-10ms of time duration for several million times without any wear and tear are being extensively used even today. The two types of switches widely used are Mini switches and Reed relay.

These switches are made up of a precious metal like Palladium, which makes the contacts work quieter, with their bifurcated design and high resistance to corrosion for long lasting design. These mechanically latched switches use “V” notches for this purpose and are highly reliable in Crossbar switching systems.

These switches mounted on Crossbars move horizontally and vertically to establish and release contacts with a switching time of 8-10ms.

In order to reduce the usage of mechanical switches and increase the operating life of the switches further, the Reed relay switches were introduced. These switches are made up of magnetic material contacts sealed in a glass tube; this protects the contacts from getting contaminated. The following figure illustrates the design of a reed relay switch. 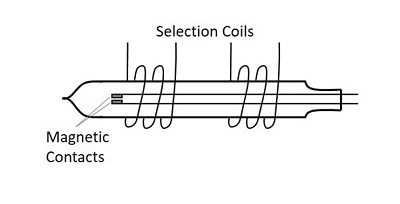 A reed relay switch may be electrically or mechanically latched; it contains the contacts very close to each other having a displacement of 0.2mm resulting in a fast switching speed of 1ms. The construction of this relay is such that the glass tube is surrounded by a pair of coils and when current is passed through both the coils simultaneously, a field is created. This further leads to the reed contacts moving together. As long as it is switched on, the electrical connection is latched and current passes through the coil.

In magnetic latching, the hysteresis of the magnetic material decides the performance. The magnetic pole pieces required may be placed outside the glass or the contacts may act as poles by choosing an appropriate ferromagnetic material. The reed relay is called the remreed due to the remnance property of the contact strips. The residual magnetism lets the contacts stay intact even after the currents are withdrawn and hence a demagnetizing current needs to be applied to open the contacts.

The organization of a Crossbar exchange consists of three basic building blocks such as link frames, control markers and registers. Link frames contain primary and secondary stages having Crossbars, connected with links between them. This two-stage arrangement with links has the effect of increasing the number of outlets for a given number of inlets. If the number of outlets is high, the selectivity is higher too.

The organization of a Crossbar exchange consists of three basic building blocks such as link frames, control markers and registers. Link frames contain primary and secondary stages having Crossbars, connected with links between them. This two-stage arrangement with links has the effect of increasing the number of outlets for a given number of inlets. If the number of outlets is high, the selectivity is higher too.

The two main sections of the Crossbar Exchange organization are

The line link frames along with associated markers and registers can be termed as Line Unit. The line units are two-way units that help in the origination and termination of calls. Because of its two-way capability, the secondary section in the line link frame is called the terminal section. The subscriber lines are terminated on the outlets of the terminal section frames.

The trunk link frame along with its associated circuitry can be termed as the Group Unit. The trunk link frame may be sub-divided into two or three link frames like local office link frame and incoming link frame, etc. Group unit is a uni-directional device that receives the calls from the line unit or from distant exchanges. It is capable of handling local, outgoing, incoming, terminating and transit calls.

A Simplified organization of a Crossbar exchange is shown in the following figure. The call processing in a Crossbar exchange is done in three stages, named as Pre-Selection, Group Selection and Line Selection.

The originating marker does the pre-selection. When the calling subscriber lifts the handset, the dial tone is heard. The register send this tone. This stage that stars from lifting the handset to sending the dialed tone is called Pre-Selection.

Once the dial tone is heard, the number can be dialed. The call is switched through the desired direction as decided, in accordance with the code given by the translator. This stage of selecting the desired group for making a call is called Group Selection.

With these three sections, a call can be connected and processed in a Crossbar exchange