The world has undergone many changes since the evolution of man. For instance, the exchange of information was initially in the form of signs and sounds. This transitioned to the language and script form with advanced inventions. The communication from one place to another which called for distance between individuals was carried through letters; sent by pigeons and between two groups through drum beats or semaphores. Men used to travel long distances to pass on messages.

Today’s world is more an age of communication. The advancement of communication techniques has increased the speed with which the transfer of information takes place. This development has not been an easy process. At the onset of the invention of communication systems, the invention and usage of telephony was the most important one. The way the telephone systems evolved from a basic system into an essential multi-purpose friendly gadget today, leaves one and all astonished knowing the innovations made out of the meagre resources available in those days.

Telecommunications represent the transfer of information, from an entity at one place to an entity at another place, whereas the information can be in the form of data, voice or symbol. The entities can be human beings, computers, facsimile machines, telegraphy machines, phones or so on. In telephone conversation, the one who initiates the call is referred to as the Calling Subscriber and the one for whom the call is destined is the Called Subscriber. In other cases of information transfer, the communicating entities are known as Source and Destination, respectively.

The point-to-point connection for establishing communication requires the telephone sets to be linked using wires. If the number of telephone sets or the subscribers present is low in number, the type of connection will be a little complex. However, if this number is high or moderate, then the connections will lead to a mess. To understand the complication, let us consider a network of 5 subscribers. 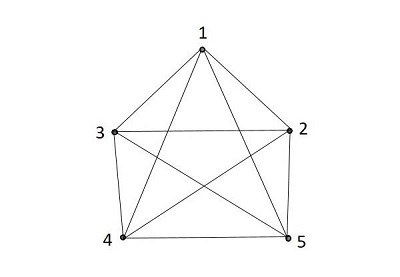 In the point-to-point connection, for n entities, we need n(n-1)/2 links. All these links form a network. Networks with point-to-point links among all the entities are known as Fully Connected Networks. The number of links required in a fully connected network becomes very large even with moderate values of n.

Hence, a system of switching the networks is needed in-between these subscribers. Alexander Graham Bell recommended the Switching between the subscribers using a switching office that maintains the telephone connections.

This network connection cannot be simply made with telephone sets and bunch of wires, but a good system is required to make or break a connection. This system is known as the Switching System or the Switching Office or the Exchange. With the introduction of the switching system, the subscribers instead of getting connected directly to one another, are connected to a switching office and then to the required subscriber.

The following figure will help you understand the switching system.

The early systems required manual operations to establish telephone calls. An operator used to receive a call from the calling subscriber and then connect the call to the called subscriber. Later on, the system was automated.

The following figure will help you understand the model of telephones in the early stage of its invention. 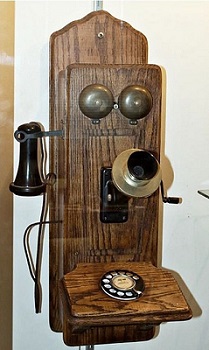 When you see the telephone in the above figure, the dialer part and the microphone are connected to a stationary wooden plank; and the speaker to listen, was connected by awire at the side. The top portion of the telephone has two bells connected - these bells ring when there is an incoming call. This is one of the earlier models of the telephone.

The telephone sets of the calling subscriber and the called subscriber are connected through a switching system or a telephone exchange in order to establish the calls requested.

In the following sections, we will learn about the switching system in detail.