As the exchange control functions are carried out through programs stored in the memory of a computer, it is called the Stored Program Control (SPC). The following figure shows the basic control structure of an SPC telephony exchange. 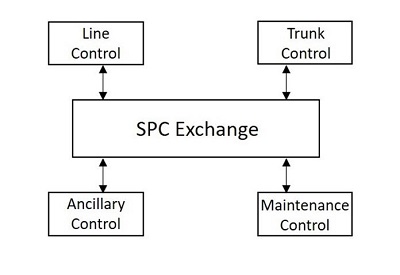 The processors used by SPC are designed based on the requirements of the exchange. The processors are duplicated; and, using more than one processor makes the process reliable. A separate processor is used for the maintenance of the switching system.

There are two types of SPCs − 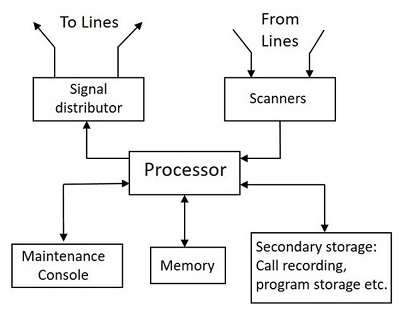 During the normal operation, both of the processors function individually receiving all the information from the exchange and also related data from their memories. However, only one processor controls the exchange; the other one remains in synchronism with the previous one. The comparator, which compares the results of both the processors, identifies if any fault occurs and then the faulty processor among them is identified by operating them individually. The faulty processor is brought into service only after the rectification of fault and the other processor serves meanwhile.

Load sharing mode is where a task is shared between two processors. The Exclusion Device (ED) is used instead of the comparator in this mode. The processors call for ED to share the resources, so that both the processors do not seek the same resource at the same time.

Unlike Electromechanical switches and Centralized SPC, the introduction of Distributed SPC has enabled to provide a wide range of services. This SPC has separate small processors called the Regional Processors that deal with different works, rather than just one or two processors working on the whole thing like in the centralized system. However, when these regional processors are required to perform complex tasks, the centralized SPC helps by directing them.

The Distributed SPC has more availability and reliability than Centralized SPC, because entire exchange control functions may be decomposed either horizontally or vertically for distributed processing. Such distributed control where switching equipment is divided into parts, each of which have its own processor, is indicated in the figure below.