The Manual Switching system requires an operator who after receiving a request, places a call. Here, the operator is the sole in-charge for establishing or releasing the connections. The privacy of the calls and the details of the called and the calling subscribers are at stake.

Let us now throw some light on how a call is made and how dialing is done without the help of an operator.

This mechanism should be present in the telephone set, in order to connect the call automatically to the required subscriber. The methods prevalent for this purpose are Pulse Dialing and Multi Frequency Dialing. Of them, the Pulse dialing is the most commonly used form of dialing till date.

Two successive trains are distinguished from one another by a pause in between them, known as the Inter-digit gap. The pulses are generated by alternately breaking and making the loop circuit between the subscriber and the exchange. An example pulse train is shown in the following figure.

The above figure shows the pulsating pattern. The pulse rate is usually 10 pulses per second with a 10 percent of tolerance. The gap between the digits, which is called the Inter-digit gap is at least 200ms.

The pulse dialing pattern in recent times employs the duty ratio (ratio between the pulse width and the time period of the waveform) of the pulse as 33 percent nominally and there exists an upper limit for the inter-digit gap.

The pulse dialing technique is where there is making and breaking of the subscriber loops. This might disturb and affect the performance of speaker, microphone and bell contained in the telephone. In addition, the dialing timings should not affect the timing of the pulse train as this will lead to the dialing of a wrong number.

The Rotary Dial Telephone came into existence to solve the problems prevailing then. The microphone and the loudspeaker are combined and placed in the receiver set. The set has a finger plate the arrangement of which makes the dialing time appropriate. The below figure shows how a rotary dial looks like.

The dial pulses are produced during the return travel of the fingerplate, thus eliminating the human element in pulse timings. The following figure shows the dial holes and finger stop. 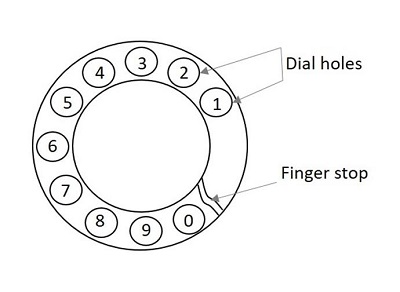 The cam mechanism or trigger mechanism helps in dialing. This mechanism is used in operating the Impulsing contact. Let us consider the operation of the rotary dial telephone using the cam mechanism. The following figure will help you understand the internal mechanism. 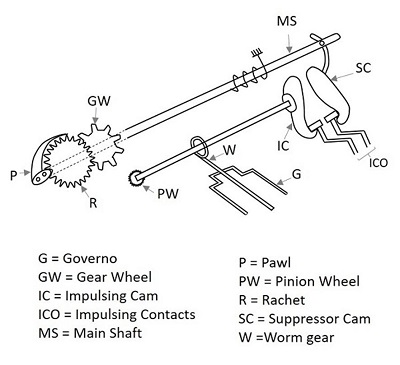 As the dial is rotated in clockwise direction, the pawl slips over the ratchet during this clockwise rotation. The ratchet, gear wheel, pinion wheel and the governor are all stationary during the clockwise movement of the dial. When the dial returns, the pawl engages and rotates the ratchet.

All the gear wheel, pinion wheel, the governor rotate, and the uniformity in the speed of the rotation are maintained by the governor. The Impulsing cam, which is attached to a pinion shaft, now breaks and makes the Impulsing contacts that in turn causes the pulses in the circuit. The shape of the Impulsing cam is such that the break and make periods are in the ratio of 2:1. When the dial is about to reach the rest position, the suppressor cam again, moves the Impulsing contacts away from the Impulsing cam. This action of getting back to the rest position and waiting for the other number to be dialed creates a gap called the Inter-digit gap, the timing of which is independent of the pause that may occur between two successive digits, due to human dialing habit. This gap is also provided prior to the dialing of the first digit through a small change in the suppressor cam design.

The Pulse generated through this mechanism is then transmitted to the switching systems where the connection to the dialed number is established. The procedure of switching systems is discussed in a subsequent chapter. Meanwhile, let us have an idea on the signaling tones that are used to indicate the condition of the subscribers.

In this section, we will understand what are signaling tones and how these work. As the manual exchanges were replaced, the operator who used to communicate the calling subscribers regarding the situation of the called subscribers, needed to be replaced with different tones indicating different situations.

The function 2 is not signaled in the Strowger switching system. The signaling function 1 is fulfilled by sending a dial tone to the calling subscriber.

The dial tone is the signaling tone, which indicates that the exchange is ready to accept the dialed digits from the subscriber. The number should be dialed only when this signal is heard. Otherwise, the digits dialed before this signal will not be considered. This will lead to the dialing of a wrong number.

Simultaneously, the control equipment sends out a ringing tone to the calling subscriber, which has a pattern similar to that of the ringing current. The two rings double-ring pattern are separated by a time gap of 0.2s and two double-ring patterns by a gap of 2s, as shown in the below figure.

A busty tone of 400Hz signal with silence period in between. The burst and silence durations have the same value of 0.75s or 0.75s.

When a subscriber call is routed through a number of different types of exchanges, one hears different call-in-progress tones as the call progresses through different exchanges. Such a signal is a 400Hz or 800Hz intermittent pattern. This signal has different patterns in different systems.

The signal for routing tone or call-in-progress tone is as shown below.

In order to overcome the problem of recognizing the difference in these tones for those who are not familiar with telephone signaling and for those who rarely make calls, voice recorded messages were introduced, later on.