The output produced by microwaves, in determining power is generally of a little value. They vary with the position in a transmission line. There should be an equipment to measure the Microwave power, which in general will be a Microwave bench setup.

This setup is a combination of different parts which can be observed in detail. The following figure clearly explains the setup.

As the name implies, it generates a microwave signal, in the order of a few milliwatts. This uses velocity modulation technique to transfer continuous wave beam into milliwatt power.

A Gunn diode oscillator or a Reflex Klystron tube could be an example for this microwave signal generator.

This is the attenuator which selects the desired frequency and confines the output around 0 to 50db. This is variable and can be adjusted according to the requirement.

This attenuator sets the amount of attenuation. It can be understood as a fine adjustment of values, where the readings are checked against the values of Precision Attenuator.

This removes the signal that is not required to reach the detector mount. Isolator allows the signal to pass through the waveguide only in one direction.

This is the device which measures the frequency of the signal. With this frequency meter, the signal can be adjusted to its resonance frequency. It also gives provision to couple the signal to waveguide.

The standing wave voltmeter provides the reading of standing wave ratio in dB. The waveguide is slotted by some gap to adjust the clock cycles of the signal. Signals transmitted by waveguide are forwarded through BNC cable to VSWR or CRO to measure its characteristics.

Now, let us take a look at the important part of this microwave bench, the slotted line.

The standing waves obtained are measured to know the transmission line imperfections which is necessary to have a knowledge on impedance mismatch for effective transmission. This slotted line helps in measuring the standing wave ratio of a microwave device.

The slotted line consists of a slotted section of a transmission line, where the measurement has to be done. It has a travelling probe carriage, to let the probe get connected wherever necessary, and the facility for attaching and detecting the instrument.

In a waveguide, a slot is made at the center of the broad side, axially. A movable probe connected to a crystal detector is inserted into the slot of the waveguide.

The output of the crystal detector is proportional to the square of the input voltage applied. The movable probe permits convenient and accurate measurement at its position. But, as the probe is moved along, its output is proportional to the standing wave pattern, which is formed inside the waveguide. A variable attenuator is employed here to obtain accurate results.

The output VSWR can be obtained by

Where, $V$ is the output voltage.

The following figure shows the different parts of a slotted line labelled. 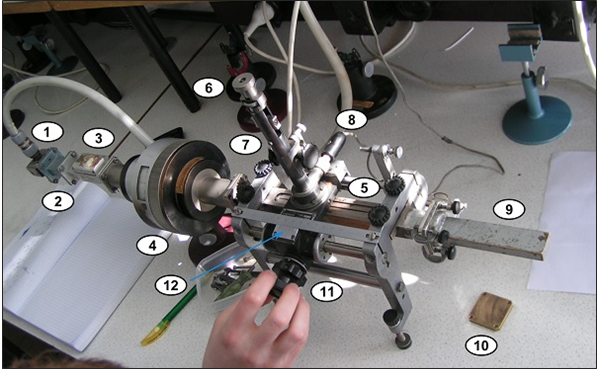 The parts labelled in the above figure indicate the following. 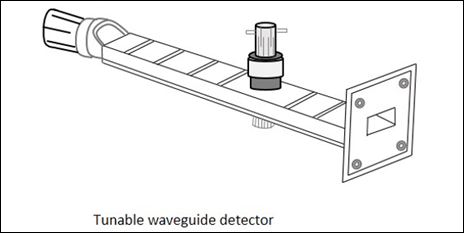 The following image represents the practical application of this device. It is terminated at the end and has an opening at the other end just as the above one.

To provide a match between the Microwave transmission system and the detector mount, a tunable stub is often used. There are three different types of tunable stubs.

The detector mount is the final stage on a Microwave bench which is terminated at the end.